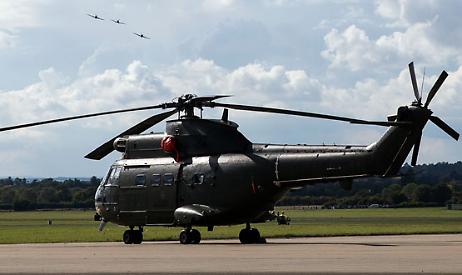 A FLEET of military helicopters at RAF Benson has been saved with the help of Henley MP John Howell.

Airbus Helicopters has been awarded a £100million contract to continue providing repairs and training services for the Puma 2 fleet.

The Ministry of Defence contract will run until March 2022 with an option to extend it for another three years.

The fleet was introduced to the RAF in 2012 and currently has 24 helicopters operated by 33 and 230 Squadrons, both based at RAF Benson. The aircraft have seen military action in Afghanistan.

Mr Howell, who had spoken in the House of Commons about concerns over the future of the fleet, said: “I am delighted to see the continuation of Puma 2 and that this contract has been awarded.

“We only have to look at the contribution that these aircraft have made to operations around the world, whether deploying in Afghanistan in support of Operation Toral or supporting vital aid in the Caribbean following the recent hurricane disasters, the Pumas have shown their enormous ability to be ready for operations within a few hours of arrival.”

Ian Morris, head of UK defence programmes at Airbus Helicopters, said: “This follow-on contract reaffirms the confidence that the Ministry of Defence has in the aircraft and in Airbus to continue to provide a cost- effective and highly capable solution to supporting our forces on operations in very demanding conditions.”