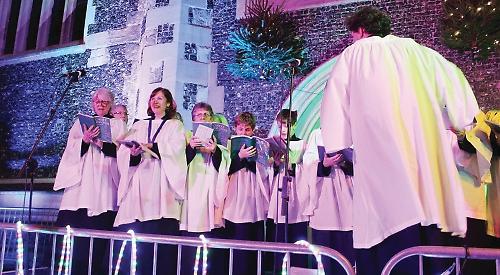 A RECORD amount was raised for charity by this year’s Henley Living Advent Calendar.

A total of £5,860 was collected during the 24 evenings of festive entertainment, surpassing last year’s record by almost £700.

The previous record was beaten even before the final performance at St Mary’s Church on Christmas Eve, which raised £601, the highest total ever for a single night.

Organiser Richard Rodway said: “It was amazing how we had such a crescendo towards the end of the programme.

“We were wondering if we would beat last year’s total and ended up obliterating it, which is just fantastic. I’m really, really proud.”

Every evening in December until Sunday, different venues hosted a 30-minute performance by a variety of acts, including musicians, singers and dancers. Each show was dedicated to a charity or a good cause, whose volunteers held bucket collections.

On Wednesday last week, guitarist and singer George Campbell performed a collection of rock classics from a window at Delegate Office and Conference Services in Hart Street to a crowd of about 50 people.

His set included House of the Rising Sun by The Animals, Knockin’ On Heaven’s Door by Bob Dylan, Streets of London by Ralph McTell, Bad Moon Rising by Creedence Clearwater Revival, I’m a Believer by The Monkees, End of the Line by the Traveling Wilburys and Johnny Cash’s Ring of Fire.

He finished with Jingle Bells with which the audience sang along before being covered in fake snow.

The evening was in aid of the Henley Regatta for the Disabled.

On the following night singer and keyboard player Toby Marlow, 23, performed on the roof of the Hart Surgery, off York Road.

He played a variety of Christmas songs including Have Yourself a Merry Little Christmas, made famous by Judy Garland, Joni Mitchell’s River, White Christmas by Bing Crosby and a medley of Jingle Bells and Rudolph the Red-Nosed Reindeer, encouraging the audience to join in.

He also played some of his own compositions, such as I’ll See You Again, which he said he had only finished that day, and Overnight, written for a friend.

The audience was served mulled wine and sweets by staff from the Bell and Hart Surgeries as well as mince pies provided by the Chocolate Café in Thames Side.

The show was in aid of the Sue Ryder hospice in Nettlebed.

Mr Rodway said: “Christmas in Henley wouldn’t be Christmas without The Marlow.”

On Friday evening, the Phyllis Court Singers performed at the town hall for an audience of more than 100.

They sang carols and festive numbers including Heavenly Aeroplane, Midwinter, Let it Snow and Mary’s Boy Child and a member of the 20-strong choir gave the history of each one. They also sang a rock ’n’ roll medley.

They were accompanied by musical director James Church on .

The male singers wore black suits with red bow ties while the women wore all black with red accessories. The performance was in partnership with estate agent Philip Booth, based in Hart Street.

It was in aid of Ronald McDonald House, a charity which provides free accommodation to families who have children being treated at hospitals in Oxford.

Staff from the estate agent served Prosecco and the charity gave out cakes.

On Saturday, ukulele band Pure Fluke performed on a stage in Falaise Square for a crowd of more than 100.

Their set included Bright Side Of The Road by Van Morrison and Fairytale of New York by the Pogues.

The show, which was sponsored by Courtiers, was in aid of the new Alexander Devine children’s hospice in Maidenhead.

Mr Rodway said: “It was such a fantastic night. I was truly humbled again by everyone’s spirit and generosity.”

On Sunday, about 200 people gathered outside St Mary’s to see and hear the church choir perform carols.

They were led by Rev Canon Martyn Griffiths, the rector of Henley with Remenham, who retires next month.

The audience joined in with classics like Away in a Manger, O Come, All Ye Faithful and Hark! the Herald Angels Sing.

The evening was in aid of Mayor Kellie Hinton’s chosen beneficiaries for her year of office, Henley’s four state primary schools.

One member of the audience was seen putting £100 into a collection bucket.

After the performance, Mr Rodway, the Mayor and her escort Councillor Dave Eggleton presided over the raffle, with prizes including a tablet device donated by Councillor Hinton’s father-in-law.

Mr Rodway, a partner at the Head Partnership solicitors in Henley, said: “I am thrilled with the turnout and people’s spirit. We have had such a great month.

“The only downside is, having smashed our fund-raising record for the third year running, we have set ourselves a big target and challenge for 2018. I think there’s still potential to push on and bring new stuff and new acts next year.”