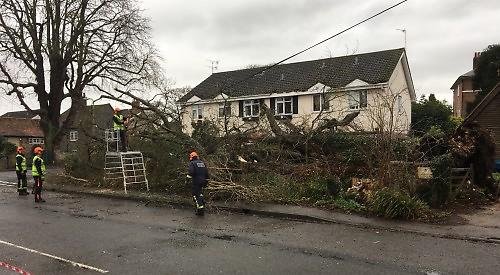 A LARGE tree fell into the gardens of three properties in Benson.

The incident happened in Brook Street during high winds yesterday (Wednesday) at about 9.45am.

On arrival they found the tree had brought down telephone wires and destabilised telegraph poles.

Firefighters quickly established a safety cordon and alerted the public to stay at a safe distance, whilst further investigations were carried out to establish if any other utilities had been affected.

Crew manager Nick Mason said: “Fortunately, no-one was in the garden at the time the tree fell. The priority was to make sure everyone was evacuated from the immediate vicinity and a safety cordon was put in place. Firefighters then cut away branches with chainsaws.”