Woman fined £200 for parking at hospital 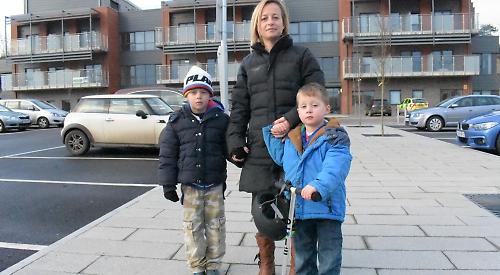 A WOMAN was fined more than £200 after parking at Townlands Memorial Hospital in Henley while taking her young son for hearing tests.

Charlotte Currie was twice issued with parking notices after attending appointments with four-year-old Finley, who has hearing problems.

Her appeals were refused was even warned by bailiffs about failing to pay.

Mrs Currie, a digital marketer, is warning other patients to beware of getting caught out if they have to visit the hospital off York Road.

She said: “I don’t want this to happen to other people as it can be quite scary.”

Mrs Currie is the latest in a long line of patients who have been fined by Smart Parking, the company that enforces the hospital car park and also used to monitor the neighbouring car park for the Bell and Hart Surgeries until it was sacked following a string of complaints.

Patients can enter their registration details on a keypad at reception to receive free parking and there is meant to be a 20-minute grace period for those passing through or dropping off patients.

Mrs Currie, who lives in Valley Road with her husband Dave, Finley and the couple’s other son Luca, six, used to attend appointments at the Royal Berkshire Hospital in Reading before switching to Townlands last year.

Finley had repeatedly failed his infant hearing test and required appointments every three to six months to check his ears.

The first visit was in July when Mrs Currie says she was not aware that she needed to register her car’s details when parking.

She was fined £60 and then lost her appeal before being told by the bailiffs that her credit rating would be affected unless she paid. She eventually paid more than £150.

The next appointment was on Thursday, November 16, when Mrs Currie says she was careful to enter her details correctly for fear of getting another fine and even asked the receptionist if she had done it properly.

She said: “She said she thought it was fine, although she didn’t actually come round the desk and look.

“In July I didn’t know about the system so I had to pay the fine. I spoke to the bailiffs who said if I didn’t pay I would be blacklisted. I got a bit upset and just went online and paid it.

“That’s why this time I asked the receptionist and joked with her that because I’d had a fine I wanted to make sure this time.

“I was even thinking about taking a photo and I thought the CCTV would show me entering my details.”

Mrs Currie was happy after the visit as Finley had passed his test only to receive another fine in the post six days later.

She said: “It just feels unfair. I have some friends who have had the same thing happen to them. There are so many complaints and you come to wonder if it’s about making money.

“It’s not like I didn’t have as serious an appointment as someone else who might need a space.”

She had to pay by today (Friday) after her appeal failed but has also been back to the hospital to ask for help and was told that a manager would ask for the fine to be rescinded.

She said: “I’ve asked them to wait and give me a bit of grace. There is the original fine but if an appeal is refused it can quite easily go up to £150. If you can’t afford that, it’s quite worrying.”

The Henley Standard has reported on a number of patients who say they have been given fines after parking at the hospital and entering their details correctly.

Others residents say they have been fined for just driving through the site.

The company did not respond to a request for comment.