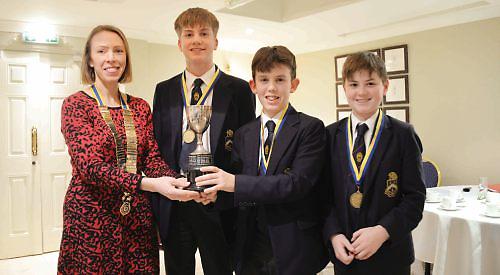 TWELVE students took part in the Henley heats of the Youth Speaks competition organised by Rotary.

Two teams from both Reading Blue Coat School in Sonning and the Abbey School in Reading demonstrated their public speaking skills at the Red Lion Hotel on Monday evening.

Their topics included overindulgence, food and the intelligence of animals.

Each team was made up of three pupils, including a main speaker, a chairperson and one who gave the vote of thanks.

The main speaker was allowed to speak for six minutes and the other two, two minutes each.

The senior section, for pupils aged 14 to 17, was won by the Blue Coat School team of Matthew Peters, Ben Freeman and Christopher Peat, who took home the the Rotary Shield as well as two individual awards.

The team’s subject was “Beyond our perception”.

They beat Lily Paterson-Holt, Frances Richards and Maddie Whitehead, from the Abbey School, whose subject was “Great expectations”. However, Maddie won the John Luker Cup for best overall vote of thanks.

In the intermediate section for 11-to 13-year-olds, Blue Coat was again victorious, taking the Henley Rotary Club Cup.

Grace won the Gabrielle Derbyshire Cup for best speaker in the intermediate section. Lisa Bennett was tutor for the Blue Coat pupils and Jane Jonsson for the Abbey pupils.

They judged the speakers on their delivery, control, content and construction of arguments.

“This evening 12 young people have stepped through that and stood on the stage, giving truly exceptional speeches. There was an exceptionally high quality of speaking the whole way through. All 12 people performed brilliantly.”

The prizes were presented by Maria Bunina, president of Henley Rotary Club. The timekeepers were Rotarians Peter Thomson, Barry Prior and Hilary Shaw.

Master of ceremonies Phil Fletcher thanked the teams and their parents and schools for supporting them.

The winning teams will now take part in the next round of the competition in Marlow on Thursday.