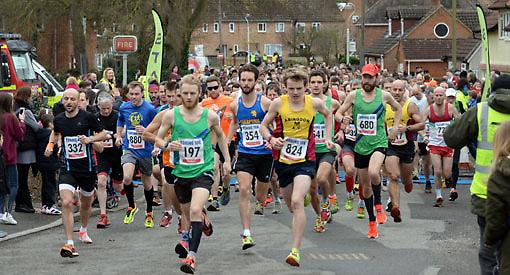 THIS year’s Goring 10km race has been cancelled.

Organisers said that following a further course inspection yesterday (Friday) they were certain that key parts of the route would not be safe for runners tomorrow (Sunday) even if there was a thaw.

They added: “Our concerns for the safety of all involved must take priority and as such, very regrettably, this year's race has been cancelled. We will be sending an email to all runners in due course with respect to refunds.”

Several inspections of the course were carried out this week and organisers were initially confident on Wednesday that the race would go ahead.

But conditions worsened on Thursday and Friday with heavier snowfall and blizzards caused by Storm Emma.

While many of the road surfaces on the route improved, there are concerns over specific parts of the course where snow is deep, compacted or sheltered.

The race was due to attract up to 1,200 runners and would have set off from outside Storton Lodge in Icknield Road and followed a circular route around the countryside north of the village before finishing in Bourdillon Field, behind Goring Primary School.

Proceeds each year go to the primary school’s parent-teacher association.

Temperatures are expected to rise across much of the south-east today (Saturday) with rain forecast this afternoon.

Many major routes are now clear of snow in Oxfordshire, but motorists are still being advised to take care on potentially icy roads.

Several businesses in Henley either closed early on Friday, or didn’t open at all, but are expected to be trading as normal today.

Sporting fixtures in the town and surrounding villages this weekend have been cancelled including Henley Hawks' game against Taunton Titans at Dry Leas today.

The club has also cancelled all other fixtures due to take place at the ground - Henley Bulls vs Shelford 2 and Henley Hawks Women vs Bath - as well as the mini and junior training session on Sunday morning.

It said in a statement: “We apologise for any inconvenience caused, but as you can appreciate, player and spectator welfare is absolutely paramount in making this decision.”

Reading Abbey Rugby Club's match against Reading this afternoon at Rose Hill, off Peppard Road, has also been postponed and will now be played on March 17.

Fixtures at Henley Hockey Club and AFC Henley have also been called off.

Have you taken any winter weather pictures? If so, we would love to see them. Please email news@henleystandard.co.uk