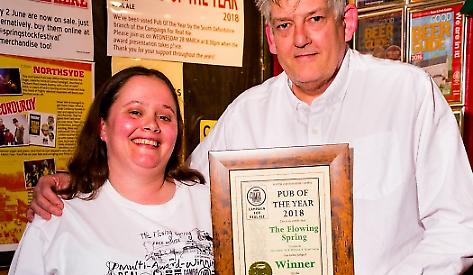 THE landlords of a Playhatch pub have received an award from the Campaign for Real Ale.

Nick Willson and Hazel Lucas, who have run the Flowing Spring for seven years, were named pub of the year by the campaign’s South Oxfordshire branch.

More than 120 pubs were eligible for the award, which goes to the pub that serves consistently excellent beer and provides a friendly environment and warm welcome.

Mr Willson said he and his wife, who purchased the pub’s freehold from Fuller’s Brewery in July, were delighted.

He said: “You see these certificates in pubs and think, ‘wow, that’s some achievement’ so for us to get it is absolutely flattering. We’re bowled over.

“It fills us with such pride that our independent free house has been recognised in this way.

“There are so many pubs closing or for sale and a lot of the pub companies seem to be looking at sites for redevelopment, cashing in on the land.

“That could potentially have happened here had we not managed to buy it off the brewery. I think that’s probably the main reason behind Camra’s decision.

“We have, in effect, saved a country pub from possible closure or at least being changed in some way it shouldn’t be. We have always been determined to keep it the characterful, historic place it is.

“The moment you stand still and stop thinking positively about your business, it’s probably going to start going backwards.”

Branch chairman David Cooper said: “The Flowing Spring has made a regular appearance in the Good Beer Guide for several years and has won this award from a very strong field.

“Since Nick and Hazel bought the pub from Fuller’s last summer, they have taken it to a new level with a wider selection of beer from many different breweries. They are unusual in offering a full range of gluten- and dairy-free, vegetarian and vegan food, for which they have also won awards.

“They host a wide range of events, which attract visitors from the local area as well as from much further afield. In a sparsely populated location, there is always a crowd of customers in the pub, which is testament to its attractions.”

Past winners of the award include the Bird in Hand in Henley and the Red Lion in Brightwell-cum-Sotwell.

Meanwhile, the Bottle & Glass Inn in Binfield Heath has received a nomination by Harden’s Guide for one of the UK’s best restaurants. The pub re-opened a year ago, having been shut since November 2013 before being bought by the Phillimore Estate and redeveloped.

It is run by David Holliday and Alex Sergeant.

In October the pub was listed in the Michelin Guide 2018 and awarded L’Assiette Michelin, which is awarded to establishments which have almost reached the standards required for a Michelin star.

Mr Holliday said: “We’re very chuffed. Year one is all about getting back on the map and to have recognition from Michelin and Harden’s within a year is absolutely brilliant. It’s great for the team.

“We’re just two people but we have got five chefs in the kitchen and the hours and commitment these guys put in are fundamental to our success.

“We try to do everything we do really well. We churn cream to make our own butter and we bake our own bread.

“We take the food very seriously but when people come to us we don’t want to have any air of pretension whatsoever. We are not in the business of telling customers what they can and can’t do.

“Getting in the guide is great because we’re not in the high street, we’re off the beaten track so to speak.”

He said the pub had just bought a £20,000 wood-fired outdoor pizza oven for use in the summer.