‘They are trying to make money out of people’s mistakes’ 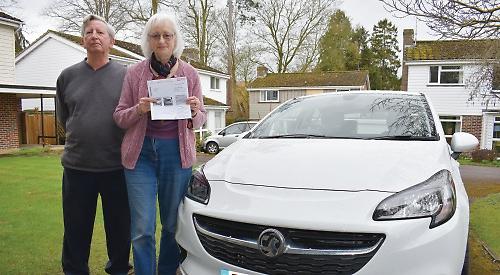 LAURENCE and Anne Reavill were fined after parking at the hospital while he attended a hearing aid appointment.

They spent about 45 minutes there and entered their car’s details in the keypad at reception but probably made an error which led to the fine.

Mrs Reavill, 74, of Nuns Acre, Goring, said: “The staff turned out to be very helpful. They said that we probably entered an incorrect car registration as this is the most common fault and there is no ticket and no record.

“I gather people are often fined for this sort of thing and nothing seems to be being done to stop it. It is not as if these errors are attempts to avoid payment.

“It’s ridiculous that they are fining people for a lapse of memory rather than parking illegally.” The couple appealed to Smart Parking but were turned down.

They have now taken their case to the independent Parking On Private Land Appeals service.

Hospital staff have said they will try to have the fine cancelled.

Mrs Reavill says she won’t use the hospital car park in future in case the same thing happens. She explained: “From now on it will be the Waitrose (King’s Road) car park, which is very cheap and you can get the cost refunded by buying something from the supermarket anyway.

“I don’t trust the system as it’s their word against ours. It’s difficult for older people — my husband is 80 and you can’t expect people of that age to remember everything.

“They are trying to make money out of people who make mistakes.”