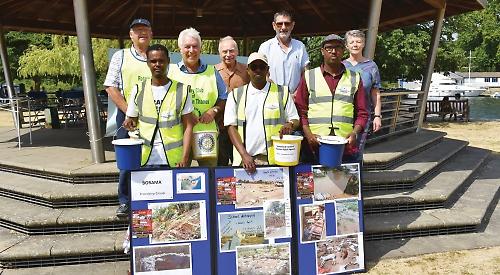 A CHARITY fund-raiser was held to help the residents of a city in Somaliand which was devastated by a tropical cyclone.

Up to 60 people were killed, homes were destroyed and livestock killed when the cyclone hit Borama, which has a friendship link with Henley, in May.

Traditionally, residents of the city in the Awdal region visit Henley each year to showcase their culture and customs with singing and dancing.

But this was deemed inappropriate following the disaster and instead, the Samasons Relief charity, which was set up by Somali refugees living in the UK, held a display and collection at Mill Meadows with information about the cyclone.

The charity had an information board with pictures of the devastation and what action was being taken, as well as buckets to make collections.

Town councillors and Mayor Glen Lambert attended the event and members of Henley Rotary Club also helped out with fund-raising.

Yusuf Djama, co-ordinator of the friendship link for Borama, said: “Usually we come with dancing and music but we decided to change the programme, there isn’t as much celebration. The cyclone hit on May 16. We lost 2,500 goats, 1,500 cows and other things like a banana farm. This is a big project and not something we can do in one day but we wanted to ask Henley for help.”

Cllr Lambert added: “They had pictures of the livestock killed and one which used to be a school but was now completely gone. It was quite traumatic.

“The event was a lot more subdued for obvious reasons, it’s usually a party atmosphere. I hope the town gets involved with fund-raising.”

Brigadier Malcolm Page, who lives in Ancastle Green, Henley, founded the Henley Borama Friendship Association in 1983, and said he was disappointed that more people didn’t attend the fund-raiser.

He said: “The need for funds for the cyclone relief is essential. I’m very grateful to the Rotary Club for giving us their support.”

Borama is on the western boundary of the former British protectorate of Somaliland, now the unofficial republic of Somaliland.