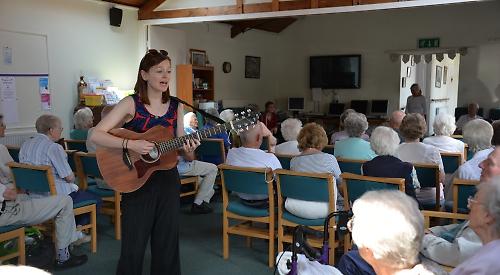 SINGER Maz O’Connor entertained members of the Henley 60+ Club ahead of her performance at the Henley Festival.

O’Connor performed a range of folk songs inspired by her Irish roots at the club in Greys Road car park on Friday last week, as well as old favourites including Bob Dylan’s Blowin’ in the Wind and Scarborough Fair by Simon and Garfunkel.

She also sang sea shanties, asking members of the club to beat out the rhythm by clapping or stamping their feet, as well as shouting out suggestions for items to include in the next verse.

O’Connor, who played at the festival’s Bedouin tent the same night, also entertained the audience with stories and facts behind her songs. For the last three years the festival has organised for one of Friday’s acts to play at the club, as well as paying for lunch for the members.

Among the guests to watch O’Connor were Mayor Glen Lambert, his wife Anna and festival artistic director Stewart Collins.

Members were seated in rows to watch the performance before being served chicken and bacon with vegetables and a lime pie dessert.

Gill Dodds, who chairs the club’s management committee, said: “Maz was wonderful, she had a beautiful voice and choice of songs.

“We had about 50 members on the day and they all appreciated it very much. It’s very generous of the festival and to have a live performance is very special.”