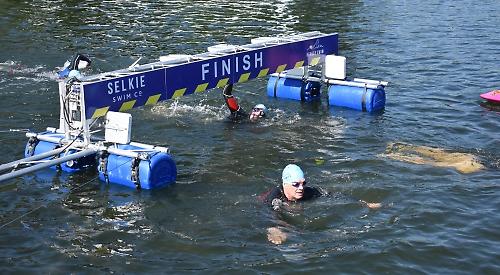 More than 750 swimmers took part in the sixth annual Henley Mile challenge on the River Thames on Sunday.

Competitors enjoyed hot weather and a river temperature of 23C as they set off at about 9.30am.

They followed a straight, mile-long downstream route along the Henley Royal Regatta course, the booms of which were still in place, between a pontoon moored opposite Fawley Meadows and Temple Island.

As well as the main mile challenge, there was a half-mile swim and a 200m Henley Splash event from children aged eight to 12.

Some of the swimmers also took on the “4 Mile Charity Challenge”, in which they swam four lengths of the course throughout the day. They could be distinguished from the other swimmers by their gold caps.

Entrants ranged in age and ability from elite swimmers to hobbyists who were taking part in their first open water event. Everyone who took part was chip-timed and had to tap a sensor at the finish line to find out their time.

The swimmers were sent off in waves by Jeremy Laming, co-founder of the event’s organisers Henley Swim, who briefed them from a boat using a megaphone.

They were escorted by lifeguards who followed them in kayaks and helped those who were struggling to get out of the water safely. Hundreds of spectators also gathered on the banks to cheer on the swimmers, where there was a podium for the winners and stall selling refreshments, swimwear and accessories.

Teenager Alfie Baum was among the fastest finishers for the second year in a row. Alfie, 15, of Didcot, was the first swimmer to cross the line in the first wave of the day.

He finished in 18 minutes and 30 seconds, making him the fastest junior swimmer at the event.

The overall winner was Antonio Almaraz, who beat Alfie by one second. Mr Almaraz, who lives off St Peter’s Hill in Caversham, has been the winner in the men’s open category for the last three years.

He came third in the Mile in 2015 and won that year’s Club to Pub swim from Henley Rowing Club to the Angel on the Bridge in Thames Side.

Saoirse McClure Fisher, 16, of Gillotts Lane, Henley, was swimming the Mile for the first time.

The Reading Abbey student, who finished in 20 minutes and 25 seconds, said: “I normally do triathlons. It was very hot today but quite refreshing when I got in.”

Mr Laming said: “I’ve never seen the water that warm before but it helps, it’s much easier to swim in the warm. New for this year was that parents could swim with their children in the 200m splash, which was very popular.”