All set for the 40th Trad boat festival 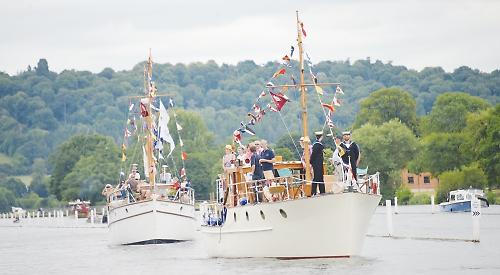 THE 40th Thames Traditional Boat Festival will take place near Henley this weekend.

It will take place from today (Friday) until Sunday at Fawley Meadows, off Marlow Road. It will open at noon today (Friday) and 9.30am at the weekend.

There will also be a First World War air display and members of the Solent Veteran Bicycle and Tricycle Club will be celebrating its 60th anniversary with their penny farthings and other old-fashioned cycles.

On the water there will be more than 200 craft, ranging from coracles, canoes, amphibious cars and a flotilla of Dunkirk Little Ships.

There will be an illuminated parade of boats tomorrow (Saturday) evening and there will be parties with live music tonight and tomorrow.

•THE winners of a competition to win two pairs of weekend tickets to the Thames Traditional Boat Festival, which was published in the Henley Standard two weeks ago were Harriet Edgell, of Makins Road, Henley, and Margaret Warrick, of Churchill Crescent, Sonning Common.

Both correctly answered that the radio-controlled torpedo boat from the First World War that will be appearing at the festival will is CMB9.