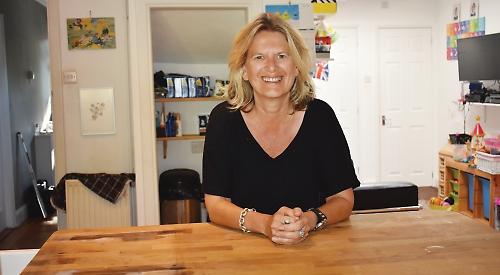 A TOWN councillor has lifted the lid of the “exhausting” experience of appearing on cookery show Come Dine With Me.

Sarah Miller, of Reading Road, Henley, appeared on the Channel 4 show last week scoring 28 out of 40 from her fellow diners for her French-themed evening.

Her menu, which was the first to air in a series of five, included baked eggs, known as oeufe cocotte, beef bourguignon and tarte au citron.

Ms Miller, 54, was beaten to the £1,000 prize by joint-winners customer care manager Susan Ridgeon and auditor John Grant-Casey. Both scored 31 out of 40.

The episode featured two other people who live in or around Reading.

“I cringed as I watched it,” Ms Miller said. “I felt I sounded incredibly posh, which I think was due to nerves with the cameras.

“I can barely remember what I said yesterday and as it was filmed in February I could not remember a lot of it. Some of it was quite funny but some of it was not really me.”

Ms Miller applied for the show in January having seen an advert on Facebook.

They later interviewed her on the phone and a few days later a small camera crew came to her home to see how comfortable she was on camera.

Ms Miller’s place on the show was confirmed at the end of January, about two weeks before it was due to film.

She opted for a French menu as some of her family live there, running hotels and restaurants.

Ms Miller gradually became more nervous in the run-up to shooting, which she was not allowed to tell anyone about.

Her partner Carolyn Ahara and their daughters Vivien and Ruby, both eight, had to move out for three days during the filming.

The day before she was due to host her guests she was filmed out and about in Henley. She was interviewed about herself and her life in Henley on the decking at the Angel on the Bridge pub.

She was also filmed on a Hobbs of Henley boat with friends Nick Smith and Louise Daly drinking champagne.

“They had been on the boat and drinking champagne as if I do it every day,” Ms Miller said. “It was the idea I was this posh girl who lives in Henley and drinks champagne every day on a boat — even though it was winter.

“I realised then when they were asking questions and they did not like the answer, they would ask the question again and say ‘perhaps you should say that’. Then it dawned on me it was quite a scripted show.”

Each contestant is given £124 for ingredients. Ms Miller was filmed spending some of it on a few bottles of wine in the Wine Rack in Market Place but they did not end up using the footage.

Her “evening” began at 8am and was not finished until about 1.30am the following day. The episode showed Ms Miller making tarte au citron, which was served with crème fraîche and raspberries.

She even made her own pastry but had to do it twice after forgetting to add icing sugar the first time round. It also showed Ms Miller using a handheld lemon juicer, which did not work properly and caused narrator Dave Lamb to quip: “Another strong worded letter to the Henley Standard coming on I think.”

Ms Miller was then shown making her main course which was served with green beans and potatoes. She then finished her preparation by creating her oeufe cocotte, explained as “baked egg to you and me” by Lamb.

She included salmon in a ramekin with cream, horseradish sauce and lemon juice then egg on top. These were baked when the guests arrived.

However, the dessert was a hit with the diners, with Lydia saying it made her tongue dance. Later Rob said Ms Miller was a great host who made good food.

There would often be an hour or more between each course and sometimes producers would prompt conversation topics.

When they were giving their scores in taxis, the diners were driven back and forth on the street with a camera crew in the back.

The show mocks up filming so it looks like they are giving the rating on the way home.

When the programme was shown last week Ms Miller was away on holiday visiting her family. She returned late on Thursday last week and attended a council meeting on Friday morning, before sitting town with a mug of tea to watch the episodes.

“Having seen it all it seemed we were all being prodded,” Ms Miller said. “Everything I did not like, was not keen on or did not want in a guest was what I was faced with.” Every night included entertainment and Ms Miller had hoped to get Henley singer Jamie Bruce to perform but producers said they would prefer something a bit different.

In the end she opted for a group, made up of members of Sam Brown’s Fabulous Ukulele Club, led by George Campbell.

Despite the show being more then she initially bargained for, Ms Miller said she enjoyed the experience.

“It was a really fun thing to do and the crew were great but it was absolutely shattering,” she said. “Watching it back I felt John and Rob were nice guys, Susan was great and I feel they probably prodded Lydia. She has since been very apologetic about what she said. I was upset she called me bland.

“They were all a really nice bunch and we are going to meet up soon. I may bring them here and we can go for a drink!”