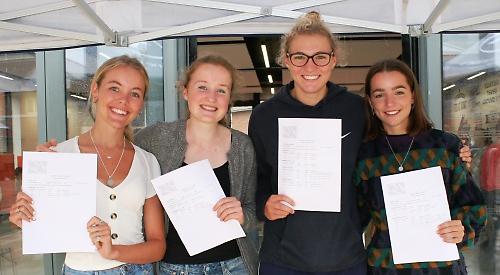 SCHOOLS and colleges across the Henley area have reported another strong year of A-level results.

Photography was the top performing subject, with 20 students achieving an A* grade and more than 85 per cent getting A* to B grades. Overall. 24 subjects got a full pass rate and there were 15 in which more than 80 per cent of grades were between A* and C.

Satwant Deol, the college's principal, said: "We are absolutely delighted with our students' results, particularly as they are mostly completing the new and harder linear, two-year A-level examinations. I would like to thank all our staff for their professionalism and dedication in teaching, guiding and supporting our students to achieve these excellent results. We are proud of them."

The overall pass rate at THE PIGGOTT SCHOOL in Wargrave was 99 per cent, the same as in 2017, although the proportion of grades at A* to B dropped to 60 per cent from 63 per cent last year. The percentage of A* to C grades was 83 per cent, down by one per cent, while the school scored 37 points per A level entry under the QCA system, one less than last year.

In vocational exams for applied general qualifications, the pass rate between distinction star and merit was 86 per cent, with every student passing their course. In technical subjects, 94 per cent of grades were at distinction star level.

Headteacher Derren Gray said: "I am pleased to announce another outstanding set of A level and vocational results. Our students and staff work exceptionally hard and this is once again shown in each of our academic, applied general and technical results.

"I wish all our students the very best for their future and thank all the teaching and support staff for their continued dedication and professionalism."

At HIGHDOWN SCHOOL AND SIXTH FORM CENTRE in Emmer Green, 28 per cent of grades were either A* or A while 81 per cent were between A* and C, an increase of four and two per cent respectively on last year, while the pass rate was once again 99 per cent.

Head teacher Rachel Cave said: "We're seeing some phenomenal levels of achievement once again, to the point where we're seriously wondering how much better it can get.

"We're absolutely thrilled, particularly as it's strong across the board in terms of both the arts and the sciences while economics has also done really, really well.

"There's talk of university clearing being a 'buyer's market' this year but we're barely used it at all while many of our students have pushed themselves to get the best possible result rather than just accepting the first unconditional offer.

"Nationally, early indications are that students' grades of C or above have dropped or remained at a similar level so to have gone up against maintenance would be terrific.

"Pupils tell me our teachers always gave them detailed, individualised feedback so they knew exactly what level they were performing at and what they need to do to improve.

"Our culture encourages students to treat college like a job. They're always studying in free time rather than cruising through lower sixth and trying to cram everything into the final months.

"It's the first time we've had heavy rain on results day but it's certainly not matched by the sunny mood here this morning."

The average number of UCAS points achieved by students across all qualifications was 129, equivalent to A, B, B grades. There were also 100 per cent pass rates at A* to C grades at in art, computer science, design and technology, philosophy, PE and photography.

Headmaster Gregg Davies said: "We are proud to be an all-ability school and despite the more demanding examinations and government reforms, these pupils will be leaving school fully equipped for the next stage of their lives.

"I am impressed by the variety of degree subjects and university destinations our leavers are going on to, with a small number choosing to pursue degree apprenticeships or go straight into employment. Popular destinations this year include Exeter, Oxford Brookes, Newcastle and Bournemouth, and they, along with the other institutions, will be gaining some fine Shiplake Old Vikings in September.

"My thanks to the interminable commitment of my colleagues whose hard work and care does not go unrecognised."

Forty per cent of grades at QUEEN ANNE'S SCHOOL in Caversham were A* or A, up four per cent on last year, while 89 per cent were A* to C, a three per cent increase. The pass rate dipped slightly to 99 per cent.

Julia Harrington, headmistress of the independent girls' school, said: "It's an excellent set of results and the girls should be exceptionally proud.

"They've all worked hard and we're delighted with the diversity of their achievements, from those going on to Oxford, Yale and traditional degree courses to those going on to study a higher degree apprenticeship. It's great to see our girls seizing the many opportunities that are available to them.

"This year in particular, we’ve seen a coming together of the academic and vocational aspects of education. The girls are achieving top grades and going on to study a wide range of subjects, with 29% studying STEM subjects, which has always been a strength for us at Queen Anne’s School, alongside music, the liberal and performing arts and courses linked to industry."

The number of A*s or As was the same at THE ORATORY SCHOOL in Woodcote, a three per cent improvement, while the number of A* to C grades was 75 per cent and the pass rate increased from 97 to 98 per cent.

Matt Syddall, deputy academic head at the independent Catholic boys' school, said: "It's been very positive to see another increase on last year as our results have been steadily improving since 2015.

"There's been a very happy atmosphere so far, with the majority of pupils getting into their first choice university and many more getting into their second to do the courses they wanted. It's been more a morning of joy and pleasure than hiccups!

"This is the second year of the new linear syllabus so there was a bit of uncertainty over the grade boundaries but we adapted well and the results have borne that out.

"Our focus has been on knowing the syllabus well and getting to grips with the examination material, which isn't easy as there are no past papers and just the one specimen.

"You're creating your learning materials with a certain element of guesswork but I'm proud to say we've been largely successful."

At READING BLUE COAT SCHOOL in Sonning, 44.4 per cent of grades were in the A* to A range, a decrease on last year's record of 48.3 per cent, while 93.8 per cent were between A* and C, a decrease from 96 per cent. The school once again achieved a pass rate of 100 per cent.

Headmaster Jesse Elzinge, who has just finished his second year in post, said: “I'm absolutely delighted with these A-level results, which represent the hard work of our pupils, staff and supportive families.

"It is pleasing to have such impressive statistics again, which demonstrates the tremendous academic progress the school has made over the past five years.

"But more important than the numbers are the many success stories of the pupils. it is wonderful to see the success at the top end, as well as a range of pupils performing to the best of their ability.

"I am perhaps most proud of the fact that the vast majority of our leavers are taking up their first choice university places; we are delighted that our leavers are so well positioned for the next stage of their educational journey."

Girls at THE ABBEY SCHOOL in Reading were celebrating a record achievement with 64 per cent of entries at A* to A grade, 98.5 per cent at A* to C and a 100 per cent pass rate.

All grades for mathematics were in the A* to A range while 90 per cent of girls got A* or A in philosophy.

This follows the school's International Baccalaureate results in which almost half of the girls who sat it scored 40 or more points out of a possible 45 while two got full marks.

Head teacher Rachel Dent said: "We're absolutely delights with our results, which are the culmination of years of hard work by students and teachers who have once again excelled.

"Whether they're accepting a place at a top university, entering the rapidly-changing job market, taking up an apprenticeship or heading off on a gap year, I'm confident that these young women will fulfil their potential.

"The girls have supported each other and worked really hard and their success is very well-deserved."

Full coverage including photographs and interviews with pupils will appear in next Friday's Henley Standard.