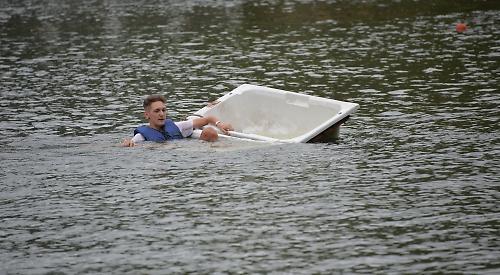 HUNDREDS of people took to the water, and some ended up in it, as they took part in the annual Hurley Regatta.

The event on Saturday saw races in punts, rowing boats and canoes, as well as the traditional bathtub and raft competitions.

There were more than 50 events during the day, with competitors taking on a quarter-mile course on the River Thames, off Mill Lane.

The regatta, now in its 46th year, culminated in the popular raft race, where teams take to the water on craft they had built themselves out of wooden poles, plastic containers and rope just hours earlier.

A total of 14 teams took part in the race, which was won by a crew called Hurley Hayseeds for the fifth year in a row.

Other imaginative team names included Aylesbury Ducks, Plough Paddlers and We Don’t Give a Duck.

One of the rafts fell apart on the way to the start line, leaving its crew stranded, but the others managed to stay intact as there was a dramatic chase to the line, narrowly won by the reigning champions.

Earlier in the day, several competitors had taken an early dip during the bathtub racing. The event sees teams of four take on the course in two bathtubs which have been welded together.

But two of the crafts filled with water as they navigated the course and the crews had to jump out as they capsized before swimming back to shore.

There were also tumbles in the paddleboarding, while several other boats crashed into the bank after veering off course during their races.

Teams of up to 16 adults competed in the dragon boat racing, which saw Dewdrop Pirates claim the trophy after outpacing a crew called Queen Mavis.

For the second year, teams took part in the children’s dongola 40, where teams of five youngsters whose combined age was 40 or less were joined by one adult.

The damsel in distress race saw canoeists “rescue” a teammate from a stationary boat in the river and take them safely to the finish line. It was won by Malcolm and Charlotte Burfitt.

The novelty canoe saw two-man crews having to pick up plastic containers of different sizes and weights from along the course before navigating round buoys at the finish line and switching places with their crewmate.

There was also a novelty tug-of-war event where two crews on their handmade rafts were connected by a rope and had to pull their opponents over a central line. The winners were Aylesbury Ducks.

Many families also took part in the racing, with the Burfitt family, of Hurley, having adult and child entrants in races including canoeing, paddleboarding and dinghies.

Two teams of Suenas also faced off in a heat of the little and large dinghy, with Kublai Suena and his son Logan, seven, narrowly losing to his sister-in-law Elizabeth and niece Bella, nine, after Logan decided to stop rowing and let his father do the work.

Mr Suena said: “It’s good fun for the kids. I didn’t expect to lose but my son was pulling against me and rowing the wrong way!”

On dry land, an arena was set up with dog racing, a traditional tug-of-war and an egg-throwing contest, where teams actually threw balloons filled with water.

Many families set up gazebos and brought along chairs and blankets to sit on, while there was also a land train run by Maidenhead Lions Club which ferried youngsters around the site. Irish singer Steve Carroll performed in the evening and children’s entertainer Smartie Artie also attended.

Television presenter Steve Rider, who lives in Hurley, took part in the racing as part of a crew in the residents’ dongola. But his crew hit difficulty after wayward steering saw them facing the wrong way as their opponents raced to the line.

Martin Fry, chairman of the regatta, said: “It was a very good day and our takings were up on last year. What we’ve been pushing for is getting more children involved. That worked very well and this year we had a lot of children who had a good time.

“The raft race was quite a dramatic race and the dragon boating was also good, with 16 adults rowing furiously.”

The regatta was raising money for brain injury charity Headway.