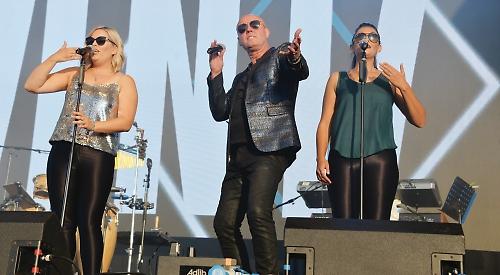 More than 20,000 people attended each day of the event at Temple Island Meadows in Remenham, where they were treated to performances by 24 acts.

They included headline sets by Kool & The Gang on Saturday and Orchestral Manoeuvres in the Dark on Sunday, as well as Rewind regulars such as Midge Ure, Chesney Hawkes and Henley resident Carol Decker.

Many of the acts had performed at the first Rewind in 2009 and were returning to mark the 10th anniversary of the festival.

Visitors dressed up in colourful outfits for the festival, donning day-glo leggings, headbands and skirts, while others came as stars of the era including Adam Ant, Prime Minister Margaret Thatcher and footballer Kevin Keegan.

Others paid tribute to popular films and television shows of the Eighties, coming as characters including Beetlejuice, the Flintstones and the Teenage Ninja Mutant Turtles.

The crowds made the most of warm weather over the weekend as they sang and danced along to the acts, some bringing along chairs or blankets to sit on.

The opening act on Saturday was From The Jam, which is fronted by Bruce Foxton of punk rock band The Jam, followed by The Orchestra, featuring members of Electric Light Orchestra, Howard Jones and Rewind regular Billy Ocean.

Ocean, who wore a white suit on stage, performed some of his best known hits including Caribbean Queen, Get Outta My Dreams, Get Into My Car and When the Going Gets Tough, the Tough Get Going.

He said: “We started it. I was here for the very first Rewind, it’s amazing how time flies.

“It’s 10 years since the first event and it’s getting bigger and bigger and that’s because it’s music that people enjoy and look forward to. There’s nothing better than seeing people enjoying themselves and knowing it’s because of you.”

Collazo, who lives in Caversham, drew cheers from the crowd as he stripped off his jacket to reveal he was wearing just a black waistcoat underneath.

The band performed songs including Native New Yorker and Going Back to My Roots.

Collazo said: “I’m always heartened when I see so many young people, middle-aged people and people my age who come together for probably one of the best eras of music.

“I only live down the road as well so it’s fantastic. I like to hear people’s memories and stories. There are a lot of young people who don’t know much about the band but they still have memories.”

Singer and actor Jason Donovan also performed on Saturday, singing hits including Any Dream Will Do and Especially For You. He was followed by Nik Kershaw, who began with songs from his back catalogue before bringing out Chesney Hawkes for a duet.

As Hawkes, wearing a yellow T-shirt and jeans, went to leave the stage, Kershaw said: “Ches, seeing as you’re here”, before they launched into a rendition of his 1991 hit The One and Only, which was written by Kershaw and sung by Hawkes.

Midge Ure, Marc Almond and Shalamar also performed in the evening ahead of the headline set by Kool & The Gang.

Howard Hewett, of Shalamar, said: “It’s our first time and I have three words for the crowd: A-maz-ing! The Eighties is real music and real music fans.”

Sunday opened with Roachford and China Crisis before Paul Carrack, formerly of Mike + the Mechanics, took to the stage.

He sang the band’s hit Over My Shoulder before making an announcement to a man in the crowd called Connor that his partner Amy was pregnant with a baby girl.

There was also a performance by Tom Bailey of Thompson Twins ahead of a set by glam rock band Doctor & the Medics. The titular Doctor, real name Clive Jackson, was also announcing the acts during the day and told the crowd before his performance: “You’ve got the Doctor but no Medics!”

He wore a sequined jacket and bright trousers and was joined by the Rewind house band for hits including Spirit in the Sky.

The Doctor was followed by Henley resident Carol Decker, of T’Pau. Decker, who will be appearing on BBC One cooking show MasterChef later this month, wore an all-black outfit as she took to the stage.

She closed the set with her best-known hit, China in Your Hand. Decker said: “I was involved in helping establish the festival 10 years ago and it’s an easy gig for me. Usually I’m planes, trains and automobiles so this is quite nice. I was hoovering my bedroom 20 minutes before coming down here!

“The Eighties was an incredible era on all sorts of levels and people remember it. You only have to look at how diverse the acts are, everyone is unique.”

Decker was followed by singer Roland Gift, wearing a flowing white shirt with a jacket over the top as he sang songs from his and his band Fine Young Cannibals’ repertoire, and synth-pop band Heaven 17.

They took to the stage wearing sparkly outfits and played the keyboard for songs including a cover of David Bowie’s Let’s Dance. Between the sets, The Doctor returned to the stage to entertain the crowds with stories and jokes.

He also handed chocolates out to the audience, playing a game with one reveller where he tried to roll a Malteser down a tape measure from the stage to her mouth. The Doctor also led the crowd in a rendition of Happy Birthday to mark Rewind’s 10th anniversary.

Kim Wilde, who took to the stage in a studded leather jacket and gloves, performed songs including Cambodia and her smash hit Kids in America.

She was followed by Jimmy Somerville, who hit the high notes to roaring applause from the crowd.

The festival was closed by a third Rewind performance by electronic band Orchestral Manoeuvres in the Dark, who shot to fame with their anti-war song Enola Gay in 1980.

Singer Paul Humphreys said: “We love doing these festivals. It’s also the 40th anniversary of the band and there’s no better place to celebrate. These songs are like time capsules and we’ve noticed our audiences are getting younger. It’s an honour to headline such an amazing festival.”

The festival’s Forever Stage also saw performances from comedians including David Morgan, Vikki Stone and Milton Jones, while Spandau Ballet star Martin Kemp did a DJ set on Sunday night. There were also attractions on the Friday night of this year’s festival, with a performance by singer Neville Staple.

Other bands performed on smaller stages around the site throughout the weekend while there were also boat parties,  a silent disco, food and drink stalls, fairground rides and dance tents.

In the VIP area, many guests crowded around the artists area to get pictures with the stars.

They included Jon Swindle, otherwise known as “The Bra Man”, who attends each year wearing a women’s bra which he has signed by the acts before auctioning it for charity. This year he will be raising money for Sue Ryder, which has a hospice in Nettlebed, and children’s charities MACS and Alice Escapes.

Among the local revellers were Nigel and Shelley Stevens, of Reading Road, Henley. Mr Stevens said: “It’s a great atmosphere, lovely people, good music and it’s right on my doorstep! I’ve got my best mates with me and it’s a great day out.”

Organiser Iain Game, of Broadwick Live, said: “After amazing Rewinds in Scotland and Cheshire we brought the sold out party to Henley where we celebrated our 10th birthday in style.

“Thanks to the local community for the support — we are excited to get started on Rewind 2019. ”