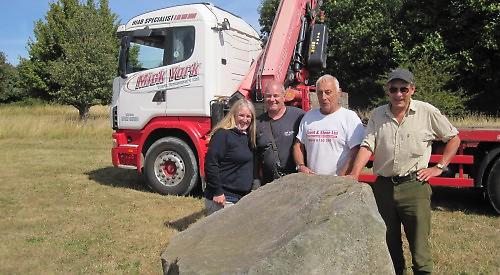 A LARGE sandstone boulder has been installed in a village to commemorate the six locals who died in the First World War.

Ibstone Parish Council decided to erect the three-ton stone on Ibstone Common to mark the centenary of the conflict.

Members wanted a natural tribute which would blend in with the rural surroundings rather than a more formal memorial or bench.

The Sarsen stone, which measures about 5ft x 4ft, was found at the Aston Rowant nature reserve near Stokenchurch and donated by Natural England, which owns the site.

Crane driver Mick York drove it the six miles to the common on the back of his flatbed lorry.

A limestone plaque commemorating the soldiers will be attached to the stone and a memorial service will be held at the site on Armistice Day (November 11) by the parish’s new rector, the Rev Mark Ackford, who is due to start work in October.

Parish councillor Melanie Grimsdale said: “We are a very rural village and didn’t want something like a bench so we chose a big stone.

“It’s a local stone and a ridiculous age. We wanted it to feel very rural and reminiscent of what Ibstone would have been like when the soldiers lived here. You can’t have more than one official war memorial in the village and we already have one at the school so this is something to commemorate it unofficially.”

Mr York was helped to put the stone in place by Cllr Grimsdale, her husband Mervyn and fellow councillor Michael Wright.

Cllr Grimsdale said: “Mick was amazing. He very kindly said that because it was such a good cause he would do it for free.

“He said he would have to do it after another job so gave us 10 minutes’ notice!

“It wasn’t just a matter of plonking the stone down, we wanted it facing the right way.

She said: “They have been really positive about the project and helped decide where the stone was going.”

In 2000, another Sarsen stone was erected on the common to mark the new millennium.