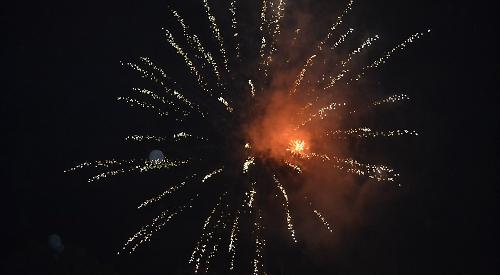 JOHN HOWELL has refused to back an outright ban on the sale of fireworks to the public.

Instead, he called on people using them to show intelligence and to have courtesy for others.

The Henley MP was speaking in a Commons debate on Monday following a petition calling for the ban, which had more than 288,000 signatures.

It also followed the Henley Standard’s Ban the Bangs campaign before Bonfire Night which discouraged people from staging informal displays of their own at home and encouraged organisers of official displays to use quiet fireworks.

Mr Howell, who was one of more than 20 MPs who took part in the debate, said: “I was introduced to this subject by my local paper, the Henley Standard, which before Guy Fawkes this year ran a campaign, Ban the Bangs.

“I fully support it, though I had some observations to make about it.

“The people who participated in the campaign were principally pet owners and one said that she and her dog ‘tremble uncontrollably’ and ‘are very, very upset’. It is important to bear that in mind.

“For many years, until she died, I had a Labrador as a pet. We, too, had to take measures to ensure that she was out of the way when firework displays took place.”

Mr Howell said that quiet fireworks could be an improvement but would not eliminate the flashes that scared many animals and vulnerable people. He said: “Many animals can cope with the increased noise — they cope with things such as traffic backfiring all the time — but they cannot cope with the sudden flashes.

“Although silent fireworks have their role to play, they do not answer the whole question.

“I understand the need for the campaign but we ought to push for intelligence, common sense and courtesy to rule, three of the rarest elements in the universe.

“We should push for intelligence on how to use fireworks, common sense in how to organise an event and courtesy to tell people when we are planning to have a display.”

Mr Howell said he regularly watched the New Year’s Eve fireworks display at the London Eye from the House of Commons and wouldn’t like to see fireworks banned altogether.

He said: “Quite honestly, if I had to give up one for the other, I would happily give up the individual displays and go for the big displays that have all the razzmatazz I am looking for.”

The debate was led by Helen Jones, MP for Warrington North, who also spoke about the dangers of fireworks to members of the public, the stress on emergency services and use as weapons.

Other MPs spoke about the impact of fireworks in their constituencies, including attacks on businesses and emergency personnel using the pyrotechnics.

They also suggested holding a public consultation but stressed that the majority of fireworks were used responsibly.

Kelly Tolhurst, parliamentary under-secretary of state for business, energy and industrial strategy, said: “I recognise that the noise from fireworks can be distressing to some people and animals. That is why there is a noise limit of 120dB on fireworks available for consumer use. Consumers can also choose to buy from the wide range of low-noise or silent fireworks that are now available.

“I want to reassure members that the Government continues to take the enforcement of firework safety seriously.”

Ms Tolhurst said she would not commit to a public consultation on firework sales until she had spoken to officials and “worked out with them what the best way forward is”.