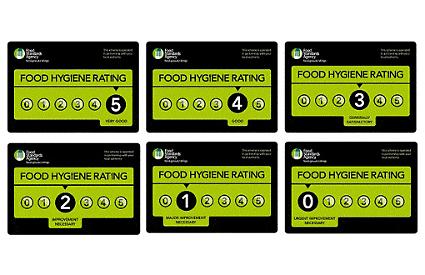 TWENTY-SIX pubs, restaurants and shops in the Henley area failed their most recent food safety inspection.

Six businesses in Henley, 14 in surrounding towns and villages and six in Caversham and Emmer Green scored either one or two points out of five under the national Scores on the Doors scheme, which has just marked its 10th anniversary.

The scores mean “major” or “some” improvement is needed in the way food is handled, stored and prepared, the cleanliness of the premises or general food safety management.

A failure to keep full cleaning, delivery and staff training records or to label all produce with its preparation date, for example, can result in a low score even when there are no problems with the premises or the food itself.

The businesses that received one star were the Farm Kitchen restaurant at Swiss Farm in Henley, the Flower Pot in Aston, the Chef King Chinese restaurant in Goring, the Crown Inn at Benson, the Fox and Hounds at Christmas Common, the Greyhound pub in Whitchurch, Hemdean Stores (now H K Stores), Ketty’s Taste of Cyprus (Kyrenia) and Whitings butchers, all in Caversham and the Pearl River Chinese takeaway and the Village Tandoori, both in Emmer Green.

Henley businesses that received two stars were the Mezo Mediterranean restaurant and the Station House pub in Market Place, Patisserie Franco-Belge in Duke Street, the Thai Orchid restaurant in Hart Street and the Anchor pub in Friday Street.

The same rating was given to seven other pubs, the John Barleycorn pub in Manor Road, Goring, the New Inn in Kidmore End, the Crown at Playhatch, the Red Lion at Peppard, the Rising Sun at Witheridge Hill, the Unicorn at Kingwood and the New Inn in Knowl Hill.

Two stars were also received by the Village Plaice fish and chip shop in Benson, the Caversham Tandoori in Prospect Street in Caversham and the Weir Grove restaurant in Wargrave.

Scores on the Doors, which was launched in December 2008, is overseen by the Government’s Food Standards Agency and enforced by environmental health officers from local authorities, including South Oxfordshire District Council and Wokingham and Reading borough councils.

But some proprietors have criticised the scheme, saying it doesn’t reflect how clean or safe their premises are as they can lose marks for purely administrative failings such as missing paperwork.

The Argyll pub in Market Place, Henley, got full marks at its last inspection in February 2017.

Landlord Neil Ainsworth says: “Scores on the Doors is a good measuring tool and I have always wanted to be compliant with its requirements as it helps us to maintain a good reputation.

“We’ve had a five-star rating for as long as I can remember and we work with the district council to continue to improve our offer. The paperwork element is very important because you need to document all that history.

“It’s not enough to just have one chef hand over informally to another and you can’t tell if food is safe just by looking at it.

“Some businesses have a ‘can’t be bothered’ attitude but meeting all those requirements takes only about 10 minutes a day and it benefits you by helping to keep up the best possible standards.”

The Three Horseshoes in Reading Road, Henley, scored five stars at its last inspection in August 2017.

Landlord Nigel Rainbow says: “It is an excellent system for making sure that every pub conforms to basic hygiene standards. We never know when they’ll be inspecting and nor should we. We’re very proud of our five-star rating and we have always been able to score five or four stars without much difficulty.

“The inspectors aren’t there to close you down but to help you understand how you can improve your hygiene, which is good for business. They give you time to make whatever improvements are needed and at the end of the day they’re only checking that you’re doing the things you should be doing as a matter of routine.”

For the full story and all the scores, see this week’s Henley Standard.