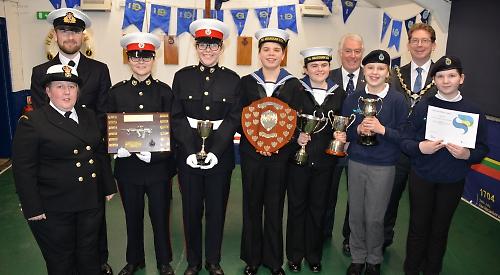 MEMBERS of the Henley Sea Cadets have been recognised for their achievements at their annual prize-giving ceremony.

Mayor Glen Lambert presented the awards with Petty Officer Abigail Bollon, the officer in charge, in front of the cadets’ families and friends at their base, TS Guardian, off Wargrave Road, Henley.

They were joined by Lieutenant David Vail, a former sea cadet and member of staff, who has been selected to command HMS Trumpeter, a patrol craft. He presented the executive officer’s award.

The trophies were to recognise the cadets for their hard work and achievements over the past year.

Friday’s ceremony also included the presentation of the colours and an inspection of ship’s company by Councillor Lambert.

PO Bollon said: “The evening is about recognising the hard work and dedication of the cadets. They appreciate it and it gives them something to work towards.

“I would like to thank the cadets and staff for all their hard work in 2018 because without that this unit wouldn’t exist.” Chairman Phil Fletcher said the evening was a celebration of the unit’s achievements over the past year, particularly those of the cadets.

He added: “What is so fantastic is seeing them come in as 10-year-olds and then they go out at 18, men and women, into society and in some cases into the Royal Navy or other forces.

“I feel very proud of the unit and it’s on nights like this that we can show off a bit.” Mr Fletcher thanked the unit’s staff for volunteering their time to instruct the cadets in the traditions of the Royal Navy and Royal Marines.

Councillor Lambert said: “I just want to say how fantastic you all look in your uniforms and how professional you are.

“The Remembrance parade last year that many of you took part in was absolutely fantastic.”

The evening also included the presentation of certificates of recognition to committee members Mr Fletcher, Sylvia McIvor and Ian Morris as well as Petty Officer Eleanor Howell for their long service.

Mr Morris has given 30 years’ service to the committee and Mr Fletcher 21 years.

The winners of the top three awards — junior, Royal Marine and cadet of the year — will have the chance to take part in a national course of their choice paid for by the unit.

The unit is appealing for more adult volunteers and instructors. If you can help, email info@henleyseacadets.org