School assembly a sea of red for Comic Relief 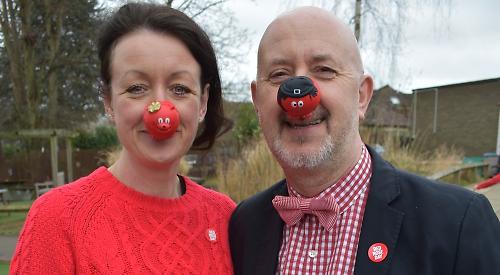 CHILDREN at Trinity Primary School in Henley dressed in red to raise money for Comic Relief.

Many wore colourful pyjama tops, while others brought in red football shirts including those of Liverpool and Manchester United. Some also wore plastic red noses.

Each child donated £1 and parents sent in extra donations.

Staff got in on the act too, with teacher Pete Moody wearing a striking red shirt and bowtie combination and others sporting jumpers or T-shirts.

Teacher Emma Bradbury, who leads the school council, said: “The council organised all this and it was their idea for the children to dress up in red. They looked absolutely fantastic. In assembly it was like a sea of red.

“They choose a charity every term and they were keen to support Comic Relief this time. We had some very generous donations from parents.”