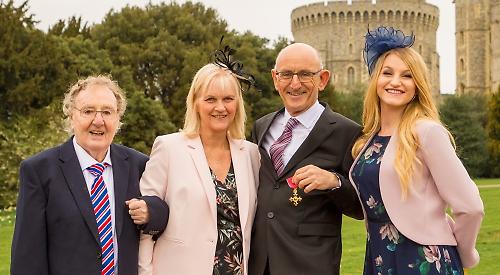 IT is best-known for providing pies and pastries to almost every high street in the country but bakery chain Greggs is now a beacon for inclusivity too.

Fresh from introducing a vegan sausage roll in January, company chief executive Roger Whiteside has received an OBE for services to women and equality.

The 60-year-old from Crazies Hill was named in the New Year’s Honours list and collected his medal from the Queen at Windsor Castle on Friday.

He says he is proud to be honoured for his work promoting women in business but there is still much to do.

Mr Whiteside, who used to run Marks & Spencer’s food business and then co-founded Ocado, took over at Greggs in 2013.

Since then he has worked hard to promote women in the business. Greggs is currently ranked number 10 on the FTSE 250 for female representation at boardroom level and it has started a female career development programme.

In 2016, Mr Whiteside joined the Women’s Business Council, which was set up in 2012 by Theresa May to tackle the barriers to women’s progression in business and works with other equality forums.

Mr Whiteside, who is responsible for more than 22,000 staff at 1,700 Greggs outlets across the country, says his focus on the issue starts at work.

He said: “From my perspective, I have the most influence in one place, which is Greggs. That’s an area I can have a very direct influence but I’m also seeking to promote the progression of women in business generally.

“Women’s representation on boards has risen over the last 10 years, which is good to see, but there’s still a long way to go.”

Greggs hit the headlines earlier this year when it announced the launch of a new sausage roll with a Quorn filling instead of meat. This was in response to what it said was demand from
customers.

While not all of the publicity surrounding the new snack was positive, Mr Whiteside says it is more evidence of the company’s aim to serve people from all walks of life.

He said: “Greggs has a long-standing tradition of trying to do business in the right way. Our support for work in the community is well-known and things like this and some of the things we are doing around the types of food we sell are all ways of people learning that Greggs is trying to be a good citizen as well as a good business.”

Mr Whiteside was accompanied at Friday’s presentation by his wife Sarah, daughter Louise and father Ronald and was delighted to receive his honour from the Queen personally.

He said: “I wasn’t told who was actually giving the ceremony so it was fantastic to see the Queen herself was doing it.

“She was stood up for a whole hour and had a short conversation with everyone who was receiving an award.

“I had a brief conversation with her about my work on women’s progression and equality.

“She has got a natural warmth and shows a real interest. In a matter of a few seconds she demonstrates interest in what you are there for.”

The family celebrated with a lunch in Windsor after the ceremony and Mr Whiteside says he is now looking forward to seeing pictures from the day.

He said: “It was all gone in a blur so it will be nice to look back on it.”