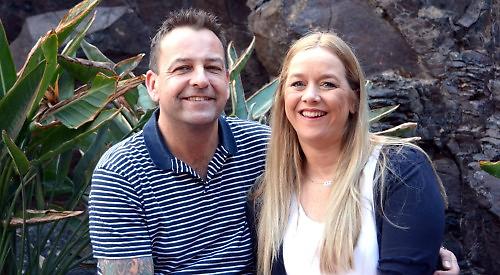 A FATHER who is fighting a rare form of cancer has begun treatment, writes Jamie Presland.

Nick Dipper, 51, from Highmoor, has cancer in his pharynx, which connects the back of the nose to the back of the mouth, and his only hope is immunotherapy treatment not available to him on the NHS.

He needs to raise £140,000 for the treatment in Germany, which helps the body’s immune system recognise and attack cancer cells, but began a course in the UK on Monday with a series of injections at Spire Dunedin Hospital in Reading on Monday.

His wife Lisa says the UK treatment could cost £200,000, separate from the course they are aiming to pay for in Germany.

They are hoping to have this covered by either a compassionate grant from the drugs company or a funding request from the NHS but in the meantime are paying almost £5,000 every two weeks from the money they have already raised.

Mrs Dipper said: “Nick started his treatment on Monday and that went very well. We are still hoping someone comes along to take over the bill but we haven’t heard anything from the drug company on compassionate grants or the funding request from the NHS.

“We are paying £4,500 every two weeks and the money at the moment is coming from our funds for Germany. We had to start treatment, time is ticking against us. We’ve got the ball rolling and now we have to keep our fingers and toes crossed that either the grant or the funding request is going to come off, otherwise that pot is going to go down pretty quickly.”

Mr Dipper, a father of three-year-old twins, was diagnosed last summer and later discovered it had spread to his bones, lung and liver. He was given just a year to live.

After initially being told that the health service would offer the treatment, the couple discovered the NHS was only licensed to offer it up as far as the mouth and that they would have to go private instead. Tests carried out last month showed that Mr Dipper had a 90 per cent expression marker, meaning he is very likely to react well to the treatment.

The couple started an online appeal for the £40,000 needed to begin treatment and another £100,000 for the rest of the course.

They have now raised almost £80,000 and supporters have organised fund-raising events.

You can donate by sending cheques or cash to the Henley Standard offices at 1 Station Road, Henley, RG9 1AD or online as follows: