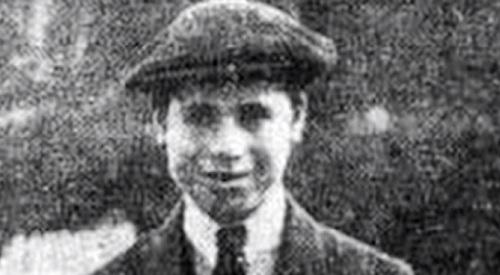 A BOY who served 10 years in prison for the murder of a pub landlady almost 100 years ago could have been innocent after all.

Jack Hewitt, 15, was convicted after Sarah Blake, 55, was found dead in the kitchen of the former Crown and Anchor Inn in Gallowstree Common in 1922.

She had suffered more than 60 wounds across her head, neck and hands and her throat was cut. The motive was thought to be robbery but a box containing £400 was left untouched.

As the last person to report seeing the victim alive, Jack was subjected to exhaustive questioning, after which the police claimed he had confessed to her murder.

Jack retracted his confession at trial but was found guilty and sent to prison, only escaping the death penalty because he was a child.

The case has been looked at again by criminal barristers Sasha Wass and Jeremy Dein as part of the BBC 1 series Murder, Mystery and My Family, which
re-investigates historic cases.

Jack was born in Henley in 1907, the eldest of five sons, and the family lived in The Hamlet, Gallowstree Common.

In 1922, the village had two pubs The Reformation, which still exists, and the Crown & Anchor as well as a single village shop at Smith’s Corner. On March 4, Mrs Blake’s neighbour called but found the front door locked. Opening the back door Mrs Blake was found dead on the kitchen floor and a blood-stained butcher’s knife was found near her body.

A post mortem was carried out the following day by renowned forensic pathologist Dr Bernard Spilsbury but he decided that the butcher’s knife, despite having human blood on it, was not the murder weapon.

Hewitt said that he arrived at the pub at about 6pm, stayed about four minutes and returned home at about 6.20pm, having had two rounds of drinks. He drank a glass of “raspberry champagne”, which was non-alcoholic, and a glass of ginger stout. No one else admitted to entering the pub after Jack had left but an unidentified cyclist was spotted on the path outside at about 7.30pm.

From 6.25pm to 7.45pm Jack said he was stood outside Smith’s shop, which fits in with the estimated time of death of between 6pm and 8pm. His mother told police that he had come home at about 7.30pm and at 7.50pm she sent him to the Crown to get some beer. Jack said the pub was in darkness so he went to the Reformation instead, arriving home again at 8pm.

Despite extensive searches of the pub and surrounding area by up to 10 officers, it was not until 10 days later that they found a clasp knife in a hedge.

On April 4, police turned up at a farm where Jack worked where he was questioned for 90 minutes. Eventually, he was said to have admitted that the knife was his and signed a confession, which had no detail as to what happened and in it he blames cinema violence as the motive. But at the Oxford assizes Jack said he was forced to sign the confession without reading it. He was found guilty and jailed.

For the first year in prison he protested his innocence to officials and reports described him as a kind-hearted, wholesome character. He was released early in May 1932 for good behaviour. The programme looked again at the butcher’s knife and expert Dr Richard Shepherd said he couldn’t understand why it was discounted as the murder weapon.

At the time of the investigation another suspect had come forward. Robert Alfred Sheppard admitted to stealing a bicycle and riding it to Gallowstree Common before committing the murder.

Officers brought him to Caversham police station and charged him but he later said his confession was under duress. Two weeks later Hewitt was arrested for the same murder and Sheppard was released.

A year later Sheppard was charged with the murder of his own girlfriend and sentenced to life in prison. On March 24, 1924, he broke away from a working party and went to the house of a prison officer and murdered his daughter. He was subsequently certified as insane.

Ms Waas said: “Sheppard was an extremely violent man with a pattern of violence against women. He is certainly a more likely candidate for this murder than Hewitt who has no history of violence whatsoever.”

Retired senior crown court judge David Radford reviewed the evidence and said the truthfulness of the confession was “highly suspect” and the conviction was “wholly unsafe”.

Jack died in 1972 and his ashes was scattered at Henley Road Cemetery in Reading.