Road shut as bus runs aground 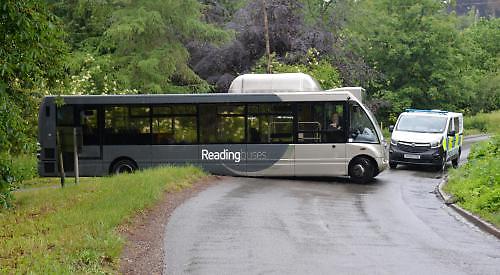 THE road between Rotherfield Greys and the entrance to Henley at Gravel Hill was shut this morning (Monday, June 10) after a bus got stuck attempting to pull onto it.

The Reading Buses vehicle, which was carrying pupils from Gillotts School in Henley, tried to merge from the junction with Rocky Lane at about 8.30am but its wheel base ran aground where the road levels out.

Passers-by called police, who arrived about 45 minutes later, and Gillotts sent out its own minibuses to bring the children to school. Members of the public may use the vehicle but no-one else was aboard at the time.

The bus was moved and the road reopened shortly before lunchtime.

Reading Buses' Connect services linking the town centre with outlying areas were also out of action this morning after the bus broke down in Market Place. The company sent another to replace it.