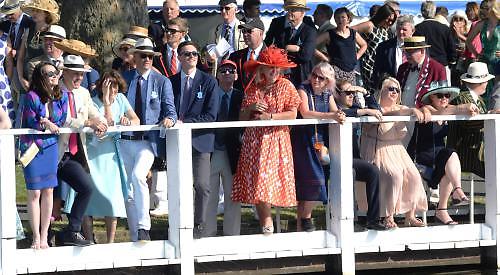 PLANS by Henley Royal Regatta to expand the event to six days have been attacked by residents living near the course.

The regatta has made a licensing application to Wokingham Borough Council to run from Tuesday to Sunday next year in order to include more races for female rowers and crews.

It says the extra day would also allow it to leave longer gaps between races and reduce congestion in the racing programme.

But at a borough council hearing Remenham Parish Council and residents of the village criticised the move citing the cumulative impact of the regatta and other events in the area, calling it “event creep”.

They are also concerned about travel inconvenience and nuisance — saying 600 cars per hour come past their homes — as well as the lack of need to expand the rowing schedule and lack of consultation with them.

Barrister Sarah Clover, on behalf of the parish council, accused the regatta’s organisers of complacency during the licensing and appeals hearing sub-committee meeting on Monday.

She said if they were serious about equality they would have taken action already.

“It is somewhat complacent that it was simply a cut and paste exercise for this application from the previous licence without stopping to consider any of the industry updates in the intervening time.”

Councillor John Merkel, chairman of Remenham Parish Council, told the hearing that the regatta had become a “public nuisance” for too many residents.

He said: “The key point really is Henley Royal Regatta is now increasingly encountering anger from miserable residents and opposition to its expansion.”

The annual regatta currently attracts about 2,800 athletes from schools, clubs, universities and national teams who take on the 2,112m course across 23 events.

Three new events for women were introduced in 2017, taking the total to seven, but the regatta now wants to add more.

Phil Crier, on behalf of the regatta, told the sub-committee that while the application was “very limited” it was of “very significant importance” to the regatta.

He said: “The first purpose, the greater diversity, is laudable. There is some criticism or some challenge to the greater spread for races.”

Mr Crier said the decision to add another day was not something the organisers had “taken lightly” and would take some considerable planning before it came to fruition.

Mr Crier added: “The application is essentially for permission to perform live music on the Tuesday as part of the extended royal regatta event between 11am and 7.30pm only and, secondly, the provision of alcohol sales from the existing bars and hospitality areas from 10am until 8pm.” Daniel Grist, the regatta’s chief executive and secretary, told the hearing that this year’s regatta had the largest ever entry of 660 crews, which placed even more strain on the racing programme.

He said: “All the planning is already in place for five days so some people say ‘you’ll have 20 per cent more work’ but the building blocks are absolutely there for an additional day.

“We haven’t had occasion to call on the police for as long as I can remember and our bars are run by highly experienced operators and we haven’t had any difficulties.”

Several meetings had been held with residents of Remenham and Mr Grist said a forum would be set up to engage with them.

But he was criticised by resident Michael Dudley who said the regatta met residents on May 22 and submitted its application to expand just days later.

He told Mr Grist a plan to engage with the community was “totally and utterly absent”.

Mr Grist responded saying that comments of residents were taken seriously, adding: “Your comments and those of your fellow Remenham residents have made us think quite hard about this and the fact we need to engage more has been well made.”

Mr Dudley replied: “It’s closing the gate after the horse has bolted, sir. The direct impact is the traffic impact.

“The only way to the regatta for vehicular traffic is down Remenham Church Lane. Traffic is an immense nuisance. This event creep has been going on and on and on.”

Mr Grist said starting the regatta on a Tuesday would have a limited impact on residents because it wouldn’t be very busy. He said: “Tuesday will not be as busy as Wednesday. I would be surprised if Tuesday’s gate is anything like 10,000.”

Resident Ron Emerson said it would be better if the organisers changed the existing format instead, adding: “We’re just residents whose legal right to the quiet enjoyment of their homes is seriously compromised.”

The meeting heard that the majority of people running the regatta were volunteers who needed breaks while competitors couldn’t be asked to race twice in a day.

Resident Neil Brown, a former competitor and current rowing coach, said: “I think the consultation which has been proposed should have happened prior to this application.

“If approved, the regatta would effectively become a seven-day event, with the qualifiers on the preceding Friday.

“It feels as if people want to have their cake and eat it. If you approve this application you will make matters worse immediately.”

The event, which was founded in 1839, started as a one-day regatta before being expanded the following year to two and then to three days in 1886, four days in 1906 and five days in 1986. It has been known as Henley Royal Regatta since 1851 when Prince Albert became the first royal patron.

The sub-committee is expected to have made its decision by Monday.