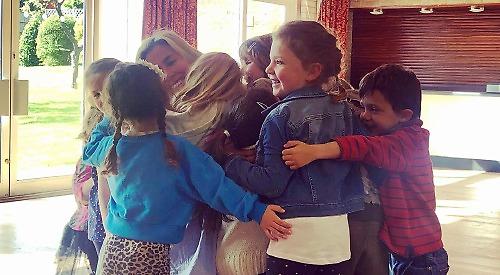 A POPULAR children’s Christmas pantomime could be facing the axe.

Henley Children’s Theatre has had an annual booking at the Kenton Theatre over the festive period for almost half a century.

Now the New Street venue says it wants to extend the run of its own professional show and move the children’s panto to February.

But Muffin Hurst, who runs the children’s theatre, called this a “slap in the face” for one of the theatre’s oldest
customers.

She says moving her panto is not feasible as the festive season is over in February and there are not as many visiting family members in town to see the show.

This year’s booking is unaffected but Ms Hurst says she has been offered a shortened four-day slot next year with no Christmas booking thereafter.

“They want to take my week,” she said. “They want to extend and use the Christmas holidays because, of course, there’s going to be more potential audiences around then but at the same time that’s when my kids are available and able to perform and there’s not the audience around.”

She asked why the Kenton couldn’t start its panto run earlier as other local theatres, such as the Hexagon in Reading and the Wycombe Swan, did.

Ms Hurst said: “It’s all very well the Kenton saying they want to extend their run but the bottom line is money. They think they will make more money for the theatre by staging their own production. That’s obviously the crux of it.

“What can I do? They could charge me more but that would have a knock-on effect on my ticket prices. I think it is short-sighted because it’s putting a death knell on children.”

Henley Children’s Theatre was founded in 1969 by Ms Hurst’s grandmother Flavia Pickworth and has stayed in the family ever since. It now caters for about 110 children.

Ms Hurst, who lives in Hambleden, said she had been contacted by two previous chairmen of the theatre trustees who had told her they were “appalled” at the plans to move her panto.

“We would have thought perhaps Henley Children’s Theatre would come first,” she said.

“I get the feeling that some of the trustees understand the impact of what we do as a group but perhaps there are some that don’t.

“I think that perhaps it has been underestimated by one or two people just how much it means to our town and the next generation coming through.”

Ms Hurst said she would be “hugely disappointed” if the children’s panto didn’t happen.

“I have always been proud of grandmother’s legacy,” she said. “It would be lovely to see it going on and on because it makes people happy.”

Ms Hurst said she understood the theatre needed a balance of amateur and professional productions but added: “If they didn’t get their regular bookings from their amateur productions they would be a bit stuck so they shouldn’t slap us in the face.”

Ms Hurst said: “The meeting I had last week they said they were going to squash my week next year.

“I had said I would compromise and could squash it into five days and at the moment I think they are saying four.”

She said some people had been coming to the children’s panto for decades as it was charming to see the youngsters on stage.

“The children love the classes they do with me on the Saturday but getting up on stage and performing is essential to what we do.

“We have propelled so many local children into careers where they have used the skills they acquired with us and I think it would be denying them that opportunity.

“We’re all beginning to understand the performing arts especially are important and integral to a child’s education so what you’re doing is taking that away from them.

“There was no other pantomime in Henley until we came along. The theatre seats 240 and sometimes we have a full house and it’s 80 per cent full on average.

“It’s a show for everyone and I keep the ticket prices low even though I’m charged more than any other user.”

Ms Hurst said she could reach a sensible compromise with the Kenton.

“I really don’t want to have ill feeling,” she said. “I have tried to do the very best of what the theatre has asked of me and hope to stay in that vein but, yes, I am upset at the treatment I’ve received.”

Christopher Tapp, who chairs the theatre’s board of trustees, said that in the last financial year the theatre hosted 97 shows, presented 190 individual performances and sold a total of 25,048 tickets, mostly to Henley people.

He said: “We have done all this with no regular external funding because we take care to manage our business with the aim of breaking even each year. Some years we achieve this, some years we don’t. However, the Kenton does not ‘make money’ and achieving a break even is getting progressively more difficult.

“Most theatres the size of the Kenton survive on the income from their pantomime. Some run for months but we have been limited to 25 performances. Last year we sold around 85 per cent of the tickets available and sales are 18 per cent ahead of this time last year so we may sell out.

“Our previous pantomime producer could not make such a short run work and while we are very grateful to Heather Simpkin and Bear in the Air Productions for stepping in, we know that they will have the same problem if we can’t extend our run significantly. The only way we can do this is to move into the second week of the Christmas holidays.

“Henley Children’s Theatre have for 50 years rented the Kenton at the standard rate for the second week of the Christmas holidays. We are well aware of how popular this is with the children involved and their parents. We had been negotiating and we believe we have found a way, with flexibility on both sides, to accommodate the needs of the three parties. We were due to meet again to discuss this and I had hoped we would come to an agreement.”

He said he hoped Sleeping Beauty would be a huge success, adding: “I just hope everyone manages to get a ticket before they sell out.”