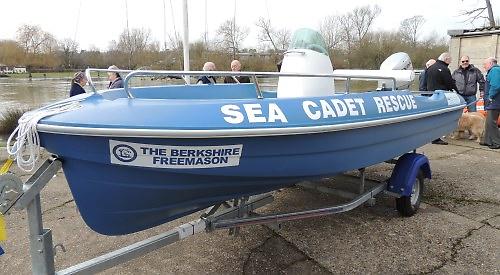 THE leader of Henley Sea Cadets says he is “gutted” after the theft of a boat and outboard motor worth about £12,000.

The theft from the Eyot Boat Centre, off Wargrave Road, is thought to have happened during Wednesday night last week when neighbours saw a boat with torches approaching the building.

The culprits took a boat, called Blueberry, which was later found at Hambleden Lock with the engine missing. The boat may have been damaged beyond repair and is still there.

Ollie Collis, the officer in charge of the cadets, said they would have to raise money to replace the boat and the grey Honda 50 horsepower motor, even though it was insured.

Mr Collis, 34, said: “I feel gutted and I think all of the volunteers are in the same frame of mind. It is just really upsetting.

“This sort of thing hasn’t happened before, certainly not since I have been here. “The boat was near the main building and just floating on the river.

“Everyone in the area knows that the Blueberry belongs to the sea cadets. I was contacted on Saturday morning by a former cadet who asked if I was missing a boat.

“Until we get the boat back, we won’t know if they damaged it to get the engine off. The Hambleden lock-keeper is aware of the situation and will contact us if the boat moves.

“We don’t have any other boats like it. It is the biggest one we have. It is a very versatile boat and we use it to teach the children all sorts of things.

“This boat supplies training that we can’t offer until it is replaced. To replace it, we are probably looking at a shortfall of as much as £6,000 from the insurance, so we will have to raise that money somehow.”

The group meets twice a week and teaches children aged 10 to 18 naval skills.

Mr Collis said: “We are all volunteers. We teach them anything to do with the Navy. If it floats, we teach them how to use it safely.”

Anyone with information about the theft should call Thames Valley Police on 101, quoting the reference number 43200028180.