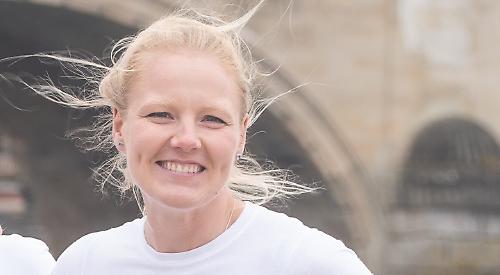 OLYMPIC silver medallist Polly Swann is working as a junior doctor during the coronavirus pandemic.

The Leander Club athlete, who lives in Henley, will spend three months working as an interim foundation year doctor at a hospital in Scotland.

She said: “A lot of junior doctors have been moved to the most critical parts of the NHS, so interim foundation year doctors are backfilling their roles.

“I’m definitely not a frontline intensive care unit worker, but I’m glad I can still help to ease the burden in some way.”

After winning a silver medal in the women’s eight at the Rio 2016 Olympic Games, she stepped away from rowing to focus on finishing her medical studies. She graduated as a doctor from the University of Edinburgh in July 2019.

Swann returned to the sport and was expected to make the squad for the Tokyo Games this summer, which were then postponed until next year.

She said: “The team at British Rowing have been really supportive and flexible. My coach, Tom Pattichis, has devised a programme with the help of our physiologist and physios that I can do while I’m working, which has really put me at ease.

“I’m staying with my parents for lockdown, so I have a rowing machine in their hallway, some dumbbells in the living room and a wattbike in my dad’s toolshed, which I’m sure is very annoying for them.”

Swann was born in Lancaster but the family moved to Edinburgh when she was still an infant.

She started studying medicine before taking a break to focus on rowing and went on to represent GB at the European Championships in 2014, achieving gold in the women’s pair in Belgrade.

Brendan Purcell, British Rowing’s director of performance, said: “Since the start of the pandemic we have discussed with athletes and staff how we can combine our pursuit of e excellence alongside our social responsibility.

“As well as the fact that Polly will be contributing to the nationwide NHS effort, our approach aims to centre on developing the person to enable them to thrive now and in their careers beyond sport.”