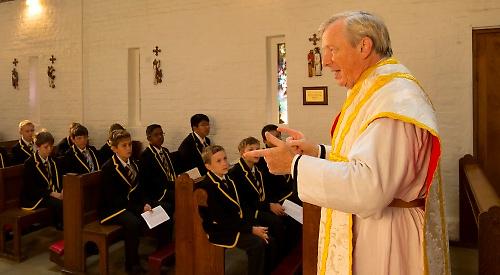 THE outgoing chaplain of the Oratory School in Woodcote is to become the village’s joint parish priest with Goring.

Fr Kenneth Macnab will step down this summer to take charge of the Catholic churches of Christ the King in South Stoke Road, Woodcote, and Our Lady and St John in Ferry Lane, Goring.

He takes over from Fr Antony Conlon, his predecessor at the Oratory, who left the independent Catholic school in 2014 and served as the parish priest until his death last month following a period of illness.

The 54-year-old will be succeeded by Fr David Elliott, the school’s current head of theology, until a new permanent chaplain is appointed and says he will keep close links with the school.

Fr Kenneth grew up in Northampton and studied theology at Lady Margaret Hall, Oxford, before training as a teacher.

He taught for a while and was then ordained as an Anglican priest and served in various posts around the country. He joined the Oratory as an assistant teacher in 2005, around the time he converted to Catholicism, and was ordained in the faith shortly after that. He taught religious education, history and classics.

Fr Kenneth said his proudest moment was seeing the school’s founder John Henry Newman, a 19th-century theologian, made a saint by the Pope last year.

He said: “I have some very happy memories, including our trip to the canonisation in Rome last year, although the celebrations back here in Blighty were every bit as enthusiastic.

“Inevitably there have also been some very sad times but this is what ministry is about — it involves the full gamut of emotions.

“Fr Antony was a dear friend and I covered for him a number of times so there will be continuity as I’d like to think I’m already known in the parish. I hope he would be quietly pleased that I’m carrying on his work.

“From a selfish point of view, I’m pleased to be able to continue working with the Oratory. There will be a lot of overlap and I think it’s fair to say they haven’t seen the last of me.”