Couple in appeal to find pet dog ‘stolen’ during walk 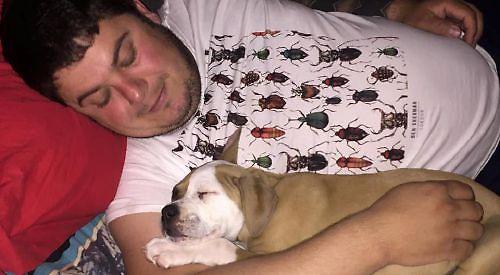 A COUPLE are appealing for the safe return of their dog after she was stolen while out for a walk.

Virgil and Oana Tatomir, from Nuffield, let Luca off her lead to explore a patch of woodland and she didn’t reappear after vanishing from their sight.

They have searched for the five-year-old American bulldog with help from the specialist charity Dog Lost but without success.

Police are treating her disappearance on May 11 as theft.

The Tatomirs adopted Luca when she was eight weeks old and living with an elderly woman who had taken her from a relative and was struggling to look after her.

About six months later, they took on Daisy, a street mongrel from Romania, and the dogs got on well.

At the time the couple lived in New Street, Henley, then moved to Baskerville Road, Sonning Common, to be nearer the countryside and then to Nuffield last Christmas.

Luca disappeared on an early morning walk past the woodland near HMP Huntercombe and the Huntercombe Hall care home.

Mr Tatomir said: “The dogs love to be off the lead and exercising their wild instincts so we let them off around the woodland for a bit before they follow us home.

“On that morning, we let them off and watched them chase each other across the fields before turning round to go home. Daisy followed shortly afterwards but not Luca.

“It has been a real nightmare ever since. We looked for her and knocked on all our neighbours’ doors but they hadn’t seen anything. I’ve had a few work colleagues combing the field in a line, like in a police search, but there was no sign of her.

“The people from Dog Lost came out with a heat-seeking drone but, sadly, that didn’t help either. I’m just so grateful for their time even though we didn’t get the result we’d hoped for.

“We’ve left no stone unturned but we’re so unhappy. Luca is dearly missed — I know some people think dogs are ‘just an animal’ but they really become part of your family.

“Thieves often take dogs to breed them and will release them into the wild if they become too ‘hot’ because of publicity, so we don’t know what might happen next.

“It’s absolutely killing us and we’d be so grateful for any information that brings her back.”

Police say they will review CCTV footage from the prison and care home to look for suspicious vehicles. They have listed Luca, whose coat is tan and white, as stolen on the national microchip database.

Meanwhile, police are also investigating a series of malicious calls which were made to the Tatomirs after they put up posters advertising their phone numbers.

The culprits rang in the dead of night and claimed to have kidnapped Luca, threatening to harm her if they did not follow a series of instructions.

On one occasion they failed to conceal their phone number.

It is believed that they were a group of teenagers not connected with Luca’s disappearance.