Father leads children’s walk in aid of his cancer treatment 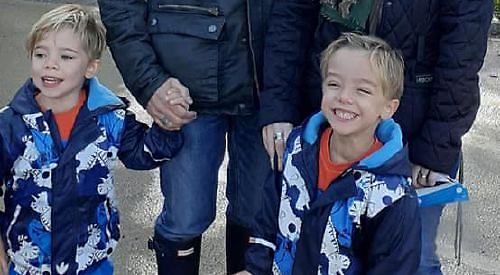 A MAN battling cancer took part in a sponsored walk to raise money for his treatment.

Nick Dipper, 52, from Highmoor, led the way as about 100 children from Peppard Primary School walked 4.5km from the school through woodland. They stopped at the Unicorn pub in Kingwood on the way for hot chocolate.

He was accompanied by wife Lisa and their twin boys, Ely and Ezra, who attend the primary but are currently being home-schooled to shield their father.

The boys, who are five today (Friday), each raised £670 towards a total of almost £7,000 that was raised by the walk last Friday.

Mrs Dipper, 39, thanked the school and pub for their support.

She said: “It was absolutely amazing. We were at the front all the way and leading the school through the woods. Nick did really, really well.

“The kids just did amazing. My two, their little legs literally wouldn’t carry them any further.

“The teachers were absolute fantastic. It was like an extended family how they all pulled together. All the kids were so polite and well mannered. It made you think, ‘What an area we live in and what a brilliant sense of community’.

“I just can’t wait for my boys to be able to go to school.”

Ingrid Johnston, a fellow parent and member of the Friends of Peppard School, said: “It was fantastic. The kids all had a great time and the Unicorn pub kindly provided a resting stop and hot chocolate. It was a great success.”

Mr Dipper, a project manager, was diagnosed with nasopharyngeal carcinoma, where malignant cells form in the tissues of the upper part of the pharynx, in 2018. He then learned it had spread to his bones, lung and liver and was given a year to live.

His wife looked into alternative treatments and was recommended immunotherapy by an oncologist friend.

However, the couple then discovered that the NHS was only licensed to offer it up as far as the mouth and that they would have to go privately.

Mr Dipper had recovered well until a scan at the Churchill Hospital in Oxford in July revealed a tumour in his left armpit. A biopsy showed that the nodule was cancerous and contained the nasopharangeal cells from his original tumour.

Mr Dipper underwent 11 hours of surgery for a full lymph node dissection of 13 nodes in August. Only one was cancerous.

He now needs further immunotherapy treatment and the development of a new vaccine to target the disease.

His wife has launched a new appeal to raise £80,000 for more treatment that could save his life. So far, this has raised almost £19,500 and an anonymous benefactor has agreed to match-fund the donations.

Meanwhile, the company that was going to test the tumour tissue has sent the family a refund as it didn’t have enough tissue and it couldn't run the type of tests the Dippers had requested.

Mrs Dipper has looked for other tests in the UK without success and the tumour may now have to be sent to Germany, which will cost more.

She said her main concern was that valuable time had been lost.

Mrs Dipper: “The tests will give us the results of how to change the vaccine and how the cancer has mutated.

“Nick’s here and able to see another of the boys’ birthdays and we’re grateful for the time we have had. Are we being greedy in having more? I don’t think so.”

Mrs Dipper is appealing for businesses, organisations and sports clubs to stage their own events to help raise money.

Hairdresser Fiona Weathers, who cuts Mrs Dipper’s hair, will be undertaking a sponsored run next month to raise money for the appeal.

To make a donation, visit https://uk.gofundme.com/f/peppard-school-sponsored-walk-for-the-
dippers or www.gofundme.com/
f/team-dipper-needs-you