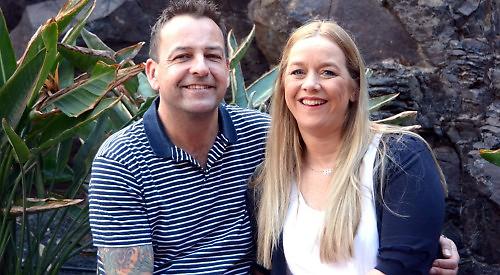 A FATHER who is fighting cancer has been told he is tumour-free.

A scan at the Churchill Hospital in Oxford showed no sign of a tumour in his left armpit that was discovered in the summer.

His wife Lisa, 39, who is raising money for his treatment, said: “It’s brilliant, absolutely fantastic.

“We have still got a long way to go to get rid of the tumour cells and stem cells to get him out of the woods.

“However, it gives us a brilliant starting point that we’re not dealing with a tumour as well. Nick was elated.”

Mr Dipper, the father of five-year-old twin boys, Ely and Ezra, was first diagnosed in 2018 and underwent treatment which cost more than £140,000 as the NHS could not provide it. He was given the all-clear a year ago but then learned in July that he had a new tumour.

Mrs Dipper launched a new appeal to raise £80,000 for more treatment. So far she has raised more than £30,000 and an anonymous benefactor has agreed to match-fund the donations.

Her husband underwent 11 hours of surgery on his lymph nodes in August followed by immunotherapy treatment in Stuttgart in September.

He has also been having monthly treatment at the Royal Berkshire Hospital in Reading. Mrs Dipper said: “The top-up treatment we had in Germany is proving to us that we’re on the right track with treatment.

“It’s the combination of the treatments working together.

“If we can spread out the treatment in Germany a little bit we will have more money in the long run to buy more.

“It’s like a merry-go-round. It’s a relief that there’s nothing there, of course, but it’s frightening as well that it can come and go as quickly as it does.

“This has definitely bought more time and has taken away the immediate worry. We’re still in fear of the unknown but the immediate threat has been lifted.

“Nick has gone from death’s door to remission to back to having a bloody good chance.

“The difference between this time and last time is that then we thought ‘that’s brilliant, Nick’s in remission, he’s cancer-free’.

“We were unaware whether there were any circulating cells and if you stop treatment a tumour will form again.”

Mr Dipper, a project manager, will need more tests to find how many tumour and stem cells are circulating in his blood.

A blood test carried out last month showed his infection and inflammation markers had fallen to their lowest levels since his original diagnosis. He is due to have another scan in February.

Mr Dipper was originally diagnosed with nasopharyngeal carcinoma, where malignant cells form in the tissues of the upper part of the pharynx.

He then learned it had spread to his bones, lung and liver and was given a year to live. His wife looked into alternative treatments and was recommended immunotherapy by an oncologist friend.

However, the couple then discovered that the NHS was only licensed to offer it up as far as the mouth and that they would have to go privately.