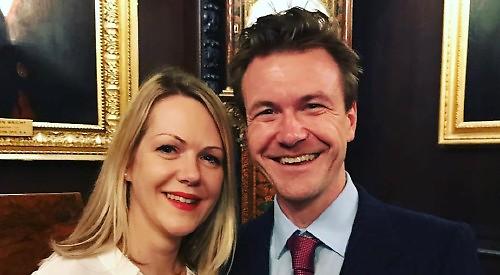 A WINE expert from Henley has told how he feared for his career when he lost his sense of smell and taste after catching coronavirus.

Alistair Cooper said he was unable to smell even the strongest of odours, including mustard and perfume.

It took two months for him to fully recover during which he had to have daily “smell training”.

Mr Cooper, 43, a wine consultant, judge and writer who has worked in the industry for almost 20 years, caught the virus in mid-March just before the country went into lockdown for the first time.

He said: “I came down with flu-like symptoms. It started off with a really sore throat, the worst sore throat I’ve ever had, and I had a headache and night sweats.

“I was bed-bound for four or five days. I thought I was better and went for a walk which completely messed me up again and put me back into bed.

“Six days after having symptoms I completely lost my sense of smell and taste.

“At that time I hadn’t heard of that as it wasn’t in the news as being part of the symptoms and it happened really quickly.”

Mr Cooper began to worry when his partner Aspen Weatherburn was cooking some bacon at their home in Albert Road and he couldn’t smell it.

“For about four days I couldn’t smell anything and everything tasted metallic.

“Literally every hour I would smell perfumes, mustard or anything strong to see if I could get my sense of smell back.

“After about four or five days I smelt some Marmite and I got the faintest smell.”

Mr Cooper, who became a Master of Wine in 2017, said that fortunately his work wasn’t affected.

“Over the following week I picked up about 40 to 50 per cent of smell and taste but I was panicking because of what I do and needed to be at 100 per cent. I did a lot of smell training. Every day I would be smelling different things around the house like Aspen’s perfume, flowers, herbs and food. It was a bit weird but I didn’t have anything much else to do.

“Once I was feeling a little better I opened some wine. I used wines that I knew very well to see if I was getting the things I would expect to.

“I took it very seriously when I was tasting things and was making notes.

“I could feel a gradual improvement. It took certainly a month before I was anywhere near 90 per cent and maybe even two months until I was at 100 per cent again.

“By mid-May I was back to what I consider full capacity. Now, I’m totally fine.”

Mr Cooper said his brother Julian caught the virus at about the same time as him and even now still only had about 70 per cent of his smell and taste.

He said: “People should be aware that they can get these senses back and not worry too much.

“But training your smell and taste and being on top of it as soon as possible is important.

“I think people that do have a honed sense of smell because of what they do for a living are much more likely to retrain themselves and have a better chance of recovery.”

Mr Cooper said the pandemic had meant he’d had to cancel about 12 trips abroad to countries including Chile, Brazil, France, Italy and Germany where he was due to judge wine competitions, consult for clients or carry out research. Before the latest lockdown he managed one trip to France. However, he has been able to work from home using Zoom.

“I consult for a lot of companies in Chile and Australia and that has gone through the roof,” he said. “I did a wine tasting for a client in Australia at 7.30am!

“We have boxes and boxes of wine around the house as we have got samples being delivered from all over the world that I’ve got to taste. Aspen’s enjoying it for sure!”

Ms Weatherburn, who runs her own communications business, was also ill shortly after Mr Cooper and believes the cause was covid-19 as she lost her sense of smell and taste too. She has since fully recovered.

Ms Weatherburn said: “We don’t know for sure whether I had it or not, but it was about two to three weeks after Ali was really poorly that I noticed I couldn’t smell much.

“My ability to taste anything sweet totally vanished and my umami (savoury) sense of taste was really warped.

“All the lockdown barbecues were wasted on me as I couldn’t tell you if I was eating a steak or a sausage.

“This lasted for at least three or four months and as my sense of smell slowly returned, most things seemed to smell of petrol.

“I also developed a month-long case of pulsatile tinnitus. I have heard of others experiencing this too.

“I now have total smell and taste restored, thankfully.

“We consider ourselves very lucky and know that covid-19 has been, and continues to be, devastating for many others.”