Pub landlord frustrated by having to shut at busy time 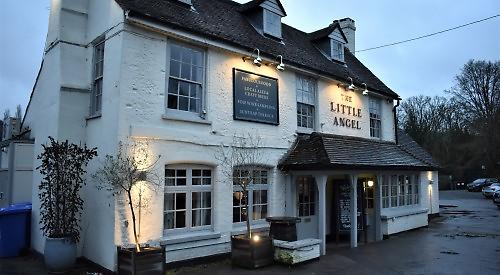 A HENLEY pub landlord says he is “frustrated” after being forced to close under the new coronavirus restrictions at one of his busiest times.

David Thompson runs the Little Angel pub in Remenham Lane, which is just inside Berkshire, one of the many areas in the South that was moved into the new tier 4, the highest alert level for covid-19 risk.

The rest of Henley and Oxfordshire remain in tier 2, meaning that all businesses can remain open and pubs can continue to serve alcohol if it is with a substantial meal.

Mr Thompson, who took over the Brakspear pub in August, missed out on the last few days of the busy Christmas period, having already lost trade during the lockdown in November.

“It is frustrating,” he said. “You can’t just keep switching pubs on and off. There are lots of overheads and there will be an enormous amount of food waste from this decision.

“Pubs and restaurants are managed safely and I don’t think the Government realises that.

“You can go shopping and stand outside in a queue, coughing in close proximity to people, and there’s nobody there taking information for track and trace and nobody monitoring social distancing. It is an uncontrolled environment,

“Yet pubs and restaurants, which are controlled environments, have to close. It is the complete opposite to what you would think is a practical solution.” The pub has 30 staff and they will all be furloughed.

Mr Thompson said: “We will be able to pull through it again. I don’t think it will be until March that we open up again, or until they get the logistics of delivering the vaccination rolled out.”

The Fox and Hounds in Gosbrook Road, Caversham, is among the other Berkshire pubs forced to close.

Kevin Durkan, who runs the pub with his wife Kerri, said: “We have spent so much money to make sure that we are covid-compliant. Every time the tier system has been changed, the area that is most affected is hospitality.

“I’m fuming — I have never felt so angry. We now face having to furlough our staff again and we’ve not even had the money for November or the job retention scheme.

“We are paying wages and we are not getting anything back — we can’t just keep pouring money down the drain. It will get to a point where we run out of money.” The pub has installed tents and heating to provide extra outdoor seating. It also has a one-way system.

Mr Durkan added: “I understand there is a need to suppress this virus, but it absolutely blows my mind that we have still got kids at school and students at universities. It is so frustrating and depressing.

“We have tried to be upbeat but to find this out days before Christmas is absolutely devastating.

“Most hospitality businesses count on the Christmas period to carry them through the leaner months but we aren’t going to have that this year.”

Jayne Worrall, landlady of the Bull pub in Wargrave, had expected the decision to toughen the restrictions.

She said: “All I have heard in the last week is that things are getting much worse and the numbers are on the increase.

“I’m obviously disappointed and sad because it is a huge loss to trade over Christmas. It had been much quieter because you couldn’t have mixed households in pubs but we had been relatively busy with food.

“It doesn’t really matter who is in charge of the country, whether it’s Boris Johnson, Keir Starmer or the King of Spain, if people don’t follow the rules.

“If you don’t follow the rules then you have to face the consequences.”

Another pub that had to close was the Dog and Badger pub in Medmenham as it is in Buckinghamshire, another tier 4 area.

Interim manager Ryan Gault said: “We had been working our socks off to get the business started again and taking on a new system of working.

“We obviously wanted to keep people happy over Christmas and we had got off to a flying start.

“We have had good support from the Government. These are trying times and it is an unprecedented situation. We have taken it on the chin and tried to get on with it but we are hoping for a better year next year. The sooner we get back to normal the better.”

Marco Suena, who runs the Rising Sun pub in Hurley, said: “We are fighting a losing battle but I hope we can get through it.

“I think it is going to be another six months before things get back to normal but we don’t even know what normal is now.

“The Government have done a brilliant job. It is very hard for them and they are doing as much as they can. Whatever decision they take, it will be bad for someone.”