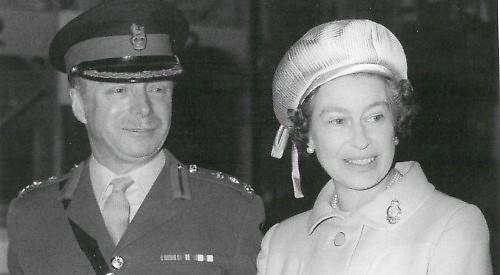 THE former president of the Royal British Legion’s Henley and Peppard branch has died.

Brigadier Malcolm Page MBE, who was 94, had stepped down for health reasons in January 2019.

He lived in Henley for most of his life and was awarded the town medal for exceptional contribution to the community in 2011.

He served the Legion, which organises the annual Poppy Appeal, for more than a quarter of a century.

In 1982 he founded the Henley-Borama Friendship Association, which maintains a link with the Somalian city and organises cultural exchange visits.

Brig Page’s military career spanned more than 30 years and he attained his rank while serving in the Royal Army Ordnance Corps in the Seventies.

He always recalled proudly being invited, as commander-in-chief, to show the Queen around Bicester Garrison a short time before he left the forces in 1978.

Twenty years later, he led a guard of honour for Her Majesty featuring about 60 Legion members from across Oxfordshire when she attended the opening of the River & Rowing Museum in Henley.

Brig Page joined the Somaliland Scouts as a junior officer after the Second World War and committed his life to helping Somali veterans who had fought for the Crown in the former British protectorate.

He adminstered relief funds to scores of ex-Scouts through the Royal Commonwealth Ex-Services League, of which he was a council member for 22 years and chairman for a time.

He led campaigns to improve schools, hospitals and roads in Somalia, raising at least £75,000.

He also arranged annual visits to Henley in which scores of delegates sang, danced and played drums in traditional costume.

Brig Page also supported the King’s African Rifles and East African Forces Association for more than 20 years and published a definitive history of the Rifles in 1998.

He was made an MBE for voluntary service to ex-servicemen and women in the 2017 New Year’s Honours and collected his medal at Buckingham Palace from Prince William, Duke of Cambridge.

At the time, he told the Henley Standard: “It was a very proud moment — it’s one thing to get a little letter from the Foreign Office and another to actually be there amid the pomp and splendour of the palace. I will be wearing the medal with pride at events like Remembrance Sunday.”

Brig Page was born in Gloucester on May 12, 1926 and lived with his father Robert, mother Winifred and younger sister Yvonne (Meachen).

His grandfather had been a Christian missionary in China but moved back to England when Brig Page’s father, who fought for the London Scottish Regiment during the First World War, was born.

He was educated at the Sir Thomas Rich’s School, a grammar in Gloucester, serving in the cadet corps, then joined the Gordon Highlanders in 1944.

During his posting in India, he rose through the ranks and was commissioned into the regiment as an officer in 1945. He was also attached to the 9th Gurkha regiment and passed his Urdu proficiency test with a perfect score.

When the war ended, he served in Greece and Ethiopia being posted to Somaliland with the Scouts in 1947. He served with them until 1951.

He moved to Henley in the early Eighties and joined the Legion a few years later. He was appointed branch chairman before becoming president. He continued as a patron after handing over the presidency to Lt Col Peter Blaker.

Mr Green, who is the current president, said: “Malcolm was a well-known and highly respected figure in the life of Henley for many years. He devoted himself wholeheartedly to the Legion and was an energetic and highly effective leader.

“One of his innovations was to provide sherry for the monthly committee meetings, which improved attendance immeasurably.

“As his physical health started to fail, he moved to permanent residence at Chilterns Court but continued to plan presentations which, sadly, he was unable to give.

“I was in almost daily contact, either by phone or by visiting prior to lockdown. He never lost his positive attitude and always asked about the wellbeing of his many friends and showed interest in world and local affairs.

“He thought it important to support local businesses and buying locally produced Mr Hobbs gin was his contribution to the cause. He will be sorely missed and never forgotten.”

Branch chairwoman Anne Evans said: “As well as working with Malcolm, I got to know him as a friend and was always astounded by his phenomenal memory for dates of events such as battles and manoeuvres. We had a lot in common as he loved Africa and I was born in Rhodesia [now Zimbabwe] and he was the reason I joined. They needed a treasurer and he persuaded me that they wouldn’t need me for long but that was 10 years ago.

“His knowledge meant he always had a quick answer when I needed help and he was always courteous and gentlemanly.”

He is survived by Mrs Meachen and her daughter Kate Osbourne.

His funeral will be held in the south chapel at Reading Crematorium in Caversham at 2.30pm on Thursday (January 28).

Attendance is severely restricted due to the coronavirus pandemic but the service may be viewed online by calling funeral director Tomalin & Son on (01491) 543370. It is also accepting donations to the Legion.

Alternatively, the service may be viewed or donations offered at https://malcolmpage.muchloved.com

His family request that no flowers are sent. Anyone wishing to express condolences should write to Mrs Meachen care of Kate Osbourne, The Keep, 69 Drum Tower View, Caerphilly, CF83 2XJ.