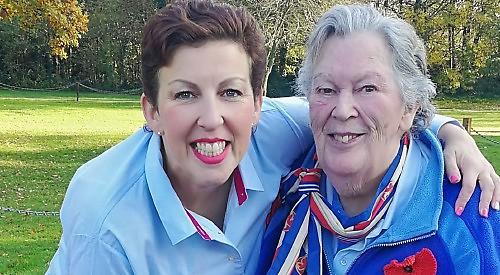 A GIRL raised £360 by reading 21 books in 21 days in memory of her grandmother, who died after contracting coronavirus.

Jessica Dingle, seven, wanted to honour Sylvia Saint, who used to love listening to her reading.

Mrs Smith died at the Royal Berkshire Hospital in Reading in November, aged 76.

Jessica decided to take up the Thames Valley Air Ambulance’s 21 Challenge to celebrate its 21st anniversary because she wants to become an air ambulance doctor and her grandmother, who had been a nurse and midwife, loved flying.

The charity encouraged people to raise £21 by doing something 21 times, such as dancing to 21 songs or staying silent for 21 hours.

To get the reading done in time, she would read before and after school and again before going to bed. Jessica said: “It was enjoyable and I got into a good reading routine each day.

“I wanted to read all the Roald Dahl that I hadn’t read before because they are interesting and really good stories.

“It sparks your imagination through the words — you can get lost in a book. In a movie they design the characters for you but reading allows you to create them though the words.”

Jessica, who attends Sacred Heart Primary School in Greys Hill, said she loved Dahl’s The Worst Witch but she didn’t have a favourite book because there were so many excellent stories.

Her mother, who is non-executive director for Soha Housing, said she was impressed at how motivated her daughter was.

Ms Dingle said: “She was just very determined from the start that she wanted to do it — she really does put her mind to it.

“Originally, I had suggested she read 21 pages but she said that wasn’t big enough. I asked if she was going to read little books then but she wanted full-length books. I’m incredibly proud of her.”

Ms Dingle was diagnosed with rheumatoid arthritis after giving birth to Jessica and says this is one of the reasons why her daughter is so passionate about becoming a doctor.

She said: “My hormones attacked me when I gave birth to Jessica so she is used to knowing that I need certain levels of help.

“We then had a car crash in Nuffield about four years ago when my little Fiat skidded on black ice and I knocked my knee.

Since finishing her challenge on January 21, Jessica has continued to read. She has also been offering to help her neighbours in whatever way she can during the coronavirus lockdown.

Ms Dingle said: “She’s a brownie now and throughout lockdown she has made cookies and artwork for the neighbours — she’s always helping them.”

Mother and daughter have been enjoying each other’s company while Jessica’s school remains closed due to the pandemic.

Ms Dingle said: “We have a timetable every day but we are enjoying quality time together.

“We are turning it into a positive thing — it’s just processing each day and going from there.”

Jessica’s earnings were added to the donations made at Mrs Saint’s funeral to make a total of more than £1,000 for the air ambulance, a helicopter based at RAF Benson.