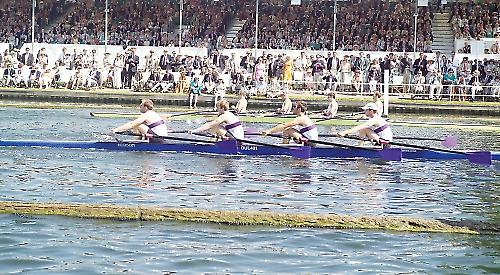 BUSINESS owners are holding out hope that Henley Royal Regatta will go ahead this year — and remain in the town.

Organisers have postponed the event until Wednesday to Sunday, August 10 to 15 to allow more time for the easing of the coronavirus restrictions to take effect.

They felt the original dates of June 29 to July 4 were too soon as the infrastructure had to start being built in March.

However, with a restriction on the number of spectators allowed to attend, the regatta may still be held at Dorney Lake in Buckinghamshire instead or could be cancelled for the second year running.

Businesses in Henley traditionally have their best trading period before and during the regatta, which is followed by the Henley Festival and the Thames Traditional Boat Festival in successive weeks.

Grace Leo welcomed the postponement as it will give her more time to complete the refurbishment of the Red Lion Hotel, which was planned to re-open in time for the event.

Ms Leo, who bought the historic hotel last year, said: “I understand it might have been a shock for a lot of people but I actually thought there was something positive from the postponement.

“If we can all work together and make it happen, then I’m ready to roll up my sleeves to help.

“I would still be building up some of my rooms but maybe we could take some of the crews. If all the hotels participated and put a few rooms up for the disposal of the crews, that might be a way to do it. Everybody should pitch in.”

Ms Leo said holding the regatta at Dorney Lake would be unfortunate.

“The regatta is part of the legend of Henley and it is the fabric of the town,” she said.

“For me, it seems conceptually and visually like saying you are going to take the grand prix from Monte Carlo and move it to the next town over. The reason why it is in Henley is because there’s the history, the atmosphere and the community. It is the heart and soul of Henley.

“Traders like ourselves would not really benefit. We would still get some footfall because it is still the summer and Dorney is not too far away but it would not have quite the same atmosphere that people are looking for.”

Following the £3 million refurbishment of the Grade II listed hotel it will be renamed The Relais, which is French for “coaching inn”.

Shaun Dickens, who runs the Bistro at the Boathouse in Station Road, Henley, said even if the regatta did go ahead in Henley, it would not be as beneficial as normal.

He said: “Even if it does go on behind closed doors, it is not going to have an impact on businesses because there won’t be the influx of people coming and spending money.

Mr Dickens, who launched the restaurant in 2013, said regatta week was the first thing he thought about when it came to planning business opportunities every year and that nothing came close in terms of potential revenue.

He said: “Those two weeks with the regatta and festival back-to-back are huge and they pay quite a lot of people’s rents for the year. It is such an important week for the town, for businesses and for locals to be a part of. It is the best week of the year and regatta dwarfs any other week of the year in terms of our takings.

“To move it to Dorney would be heartbreaking but we would just have to accept it and look ahead to next year.”

Lorraine Hillier, who runs the Hot Gossip coffee house in Reading Road, said: “If it was cancelled, it would be a great shame.

“It is good for the town, particularly hospitality and those businesses will miss out a great deal. We need that feelgood factor in Henley as it brings a lot of tourism to the town. It would be a great shame to lose it but there’s nothing they can do about it.”

Andrew Sanders, head of the coffee chain Harris + Hoole, which has an outlet on the corner of Duke Street and Hart Street, said: “We’re glad they’re postponing it because that means there is some chance that it will go ahead.

“It is a key part of Henley life and we would want it to happen but in the pandemic we are used to things being different.

“Henley remains our best performing shop and that’s hopefully the way we will continue. I worked during the 2019 regatta in the kitchen so know how busy it is. It also becomes a venue for the rowers, who sit upstairs and watch their races on their laptops.

“It would be a loss for us, not just commerically but culturally. It gets us well embedded in the local community and a lot of people who haven’t been in before then become regulars.”

Laurence Morris, who runs Laurence Menswear in Duke Street, said he always traded well during the regatta period and the thought of it being cancelled was disappointing but not unexpected.

“If it is away from Henley, it almost becomes like going to Ascot. People will still want to look the part so hopefully there will still be regatta business to be done.

“If it is cancelled then it is not going to do me any favours. The regatta is hugely important to a shop like mine — the business that I can do in June in the lead-up is a significant part of my summer season.

Marion Crocker, proprietor of the Estilo boutique in Duke Street, said: “I have been talking to suppliers and I’m already looking at stocking up, but I am erring on the side of caution and assuming many of these events may not take place.

“I still don’t think we’ll have a demand for formal clothing. Even if we were to open in April, the vaccination programme won’t have got through the nation by then.

“Fortunately, because of the way I buy stock, I can be told we are going to re-open in a month and buy the night before and have stock in that day. If there are no formal events, I can stick to casual.”

Sandie Harrow, co-owner of the Stocks boutique in Bell Street, said: “I’m extremely pleased that the regatta have tried to give us another date. It can’t be easy for them but I would very much hope it can take place in August and the festival can happen after that.

“During the event itself, people spend a lot of time down by the river, but in the run-up we would sell a lot of ladies’ dresses and hats. It is such a prestigous event and is extremely important to the town. You can’t imagine Henley without the regatta.”