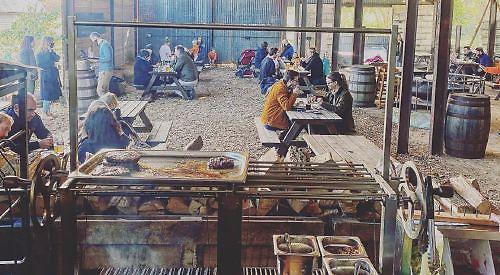 PUBS and restaurants are proceeding with caution after being given a roadmap for the lifting of coronavirus measures.

Although they can start to serve customers from April 12, this will be outdoors only for at least a month.

The possibility of trade being heavily dependent on weather means some have decided to wait until May to bring staff back and re-open fully.

Limits on social contact are set to remain until June, which means covid safety measures will restrict the number of customers for some time.

Jayne Worrall, who runs the Bull pub in Wargrave, only has a small garden area with six tables so she has decided to wait until May 17 when customers are expected to be allowed indoors.

She said: “I’m going to leave it until May when the pubs can open properly because I don’t think it’s going to be financially viable for me.

“If you’ve got a big garden where you can seat 100 or more people it is a different kettle of fish but for the Bull it’s just not the same.

“I can’t put any more tables out there because they’ve still got to be a safe distance apart. The weather isn’t reliable either and I know I could put up a canopy but that would be an additional cost.

“I’m not putting that up and taking it down every five minutes to suit England’s weather in April. By April, I will have been closed for a long time, so I can wait another month.

“People would have to come through the pub to get to the garden and if you only have six tables it is just not enough trade to justify being open and bringing staff back.”

Dan Wilson, who runs the Bird in Hand in Sonning Common, says he is not sure when he will re-open the pub.

Although he has a bigger garden with about 20 tables, only eight of them are covered in case of bad weather.

He said: “We are still thinking things through at the moment. We are hoping to re-open the garden in April but there’s a lot to think about.

“We need to think about the weather and if you do open and bring staff back and it rains, you’ll have an empty pub.

“It is going to be incredibly weather dependent, which doesn’t really help when you have to buy stock weeks in advance.” Mr Wilson and his wife, Helen Blundell, had only been trading for about 18 weeks before the first national lockdown began almost a year ago.

He said: “We’ve had a process of being open, then closed, then open and closed again. For us, we really want to get it absolutely right and say, ‘We’re open and we’re staying open’ and avoid going backwards and forwards.

“I know a lot of publicans were waiting to see what the budget had in store to see what other financial help there may be.”

Nick Willson, who runs the Flowing Spring in Playhatch, said: “We just don’t know whether it will be financially worth opening or not.

“It is down to another compromise, where we can choose to open for another five weeks in the garden only. We do have a big garden and if the weather is good it might bring people out, but if it’s not then it won’t.

“The problem we’re battling with is that our pub is not about being out in the garden – it is about socialising and chatting across the bar and the community spirit.

“I don’t think a lot of our locals will be particularly enamoured with just being in the garden and not being able to mix much.

“I think there needs to be more offered to help get the pubs through to the middle of May.

“It means bringing staff in and if you weigh up the numbers against the extra costs, we’re not convinced it will be worth it. In May, we can open our doors poperly and bring back a bit of that banter and feelgood factor.”

Ted Docherty, who runs the White Hart in Nettlebed and the Crown in Playhatch, said he was considering phased re-openings.

He said: “I am a little bit upset that non-essential shops can open and we can only be open outdoors. It is frustrating.

“I don’t understand the logic of having dozens of people wandering around a clothing store but you can’t have people sitting in a restaurant.

“We’re not going to win these arguments but there’s never been any proof that pubs and restaurants are a vector of the virus.

“The most important thing is we have a date to work towards. Until now, we’ve been kicking our heels in frustration.

“The garden at the Crown is a bit bigger so we can operate with that and get going again, which is the main thing. A lot of the success of the outdoors stuff will come down to the weather.

“The big question is ‘Are we going to trade seven days a week, or should we be a little bit more conservative and trade Thursday to Sunday, which we are still pondering that at the moment. It’s not the easiest decision to make.”

The Bottle & Glass Inn in Binfield Heath is hoping to make the most of the time before customers can return to indoor dining.

As of Wednesday, the team have started selling drinks, snacks and light lunches from a repurposed horsebox in the car park area.

The old kiosk was closed at the beginning of the year due to concerns about attracting too many visitors.

The burger barn, a disused tractor and hay shed will have the sides removed in order to be classified as outdoor space and will be open from April 12. Marquees are also going up in the garden to accommodate customers.

David Holliday, the pub’s co-owner, said: “We’re very pleased to have some outside areas to trade from and we know we’ve got to be flexible again to be able to take advantage of that.

“When things get relaxed in May, we will then look to take the next step.

“I’m really hoping we have a busy spring and summer and get back to some sort of normality. I have to say, though, that I do feel slightly for the pubs and restaurants that don’t have outside space. It is pretty tough on them if they have to wait until May.”

Paul Clerehugh, who runs the Crooked Billet in Stoke Row, has introduced a marquee in the garden that is capable of holding about 60 people.

He said: “We are relieved and cautiously optimistic. Outside dining as a restaurant is not ideal, but I suppose it is a soft and gentle way for us to re-open.

“My dilemma is the visitors will still need to use inside areas like the loos and I slightly wonder why we can’t just have extremely well socially distanced tables inside with plenty of ventilation. It makes me scratch my head, really.

If I can have people under a marquee with the sides removed and guests are allowed to use the facilities to wash their hands and use the loos, you wonder why we can’t operate inside.

“I do get it and I don’t want to risk the health of my guests or my team, so we will get on with it. At least we can trade and I have to trade because a lot of my competitors will.”

Liam Simpson-Trotman, who runs Orwells Restaurant in Shiplake Row with his husband Ryan, only plans to do outdoor dining on a sporadic basis.

He said: “I’m not really in favour of a marquee and just for a few weeks is that really worth it?

“If it is a sunny day, we might open up the garden. We’ve only got about 12 benches but it is such a beautiful space to look over the countryside.

“April is famous for showers, so we need to be cautious. I would rather play it safe and look to the future rather than go all guns blazing and go back into another lockdown.

“It’s good news and it gives us time to plan. Over the last few months, the biggest issue we’ve had is the uncertainty. We’ve been doing what we can to survive but now we can start to make plans, which is nice.”