Reaching final of TV show has made me better artist 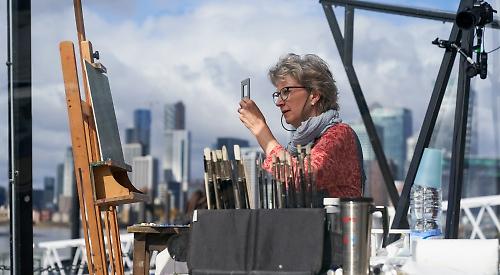 A PAINTER from Wargrave says she will now take her hobby more seriously after reaching the final of TV’s Landscape Artist of the Year.

Shelagh Casebourne was praised by the judges on the show but lost out to a professional in the competition to win a commission worth £10,000.

Despite this, she said: “I think the experience has already changed me.”

Mrs Casebourne, an amateur oil painter, was one of three competitors — all women — in the final of the latest Sky Arts programme, having qualified through several heats.

The series was filmed last summer but the final was not broadcast until last week, so she was not allowed to tell anybody until now how she had performed.

The finalists were invited to London to capture the skyline, including the Millennium Dome, looking from Trinity Buoy Wharf on the River Thames.

They were given four hours to produce their own interpretation of the view.

Mrs Casebourne, who has an art studio in her garden at home, got off to a slow start and hardly touched her canvas for the first hour as she made a sketch of her composition.

She was inspired by the history of the area and used a viewfinder to identify key features such as the boats and the overcast sky rather than focusing on the relatively modern dome.

She told presenter Stephen Mangan that she was ignoring “that huge thing that’s right in front of us”.

Mrs Casebourne recalled: “It was just such a huge panorama and was so diverse but the arena dominated it a bit.

“It was a complicated task but I was glad to have my viewfinder to find my composition. It was about finding something that inspired me.

“I loved the idea of the history of all the boats coming through and it seemed to be quite a timeless view. That whole vista was appealing.”

When the time was up, the finalists’ three paintings were considered by the judges, art historian Kate Bryan, art curator and writer Kathleen Soriano and portrait painter Tai Shan Schierenberg,

They praised Mrs Casebourne for her use of light and colour before naming the winner as Ophelia Redpath, who makes a living from her work. The prize was a commission to paint the surrounds of Snowdonia National Park in North Wales.

“I loved Ophelia’s work,” said Mrs Casebourne. “She has got a really unique artistic vision and I was thrilled for her.

“I was completely amazed to reach the final. The best way to sum it up is to say it was the most extraordinary opportunity and so unexpected.

“I felt so lucky all the way through to be taking part because the programme is very popular.

“I think the experience has already changed me hugely — I went in as an amateur and once I knew I’d been selected I was working really hard every day to try different things. It has certainly changed my approach to my work by taking it more seriously.”

Mrs Casebourne, who is married with two grown-up children, comes from an artistic family but only rediscovered the joys of art later in life.

After school, she did an English degree and then had a career in publishing and became publishing director at Time Life in London.

It wasn’t until 2010 that she obtained a fine art degree from the University of Reading and only in 2019 that she installed her home studio to give her more space to work on her paintings.

She had watched every series of Landscape Artist of the Year and its sister show, Portrait Artist of the Year, when she saw an appeal for applications on Instagram during the first coronavirus lockdown last year.

Mrs Casebourne entered by submitting a painting of an old container and pine tree located at the edge of Endalls Farm, near her home.

She was shocked when she received a call from the show’s producers to say she had been chosen from thousands of applicants as a “wildcard”.

“It was so amazing to be selected,” said Mrs Casebourne. “There are normally 50 wildcard places and I think there were fewer this time with them having to be very health and safety conscious.

She won the first of six heats, with her first episode being filmed in July at Chartwell House in Kent, the former home of Winston Churchill.

In her semi-final appearance, she impressed the judges with her impressionistic painting of the Queen Elizabeth Olympic Park in Stratford in east London. As part of the final, the artists also had to take on a private commission from a visit to Kew Gardens and each one was allocated a different position. Mrs Casebourne focused on the staircase inside the iconic Palm House.

She was filmed at her home studio over three days using time lapsed footage in the week between the semi-final and final.

She said: “The inside of the Palm House was tropical and lush and there were lots of long pathways but that little corner with the spiral staircase was the best view for me.”

The judges described her painting as “gorgeous”.

Mrs Casebourne said she felt “panic-stricken” at every stage of the competition until the final.

She said: “The final was only a week after the semi-final, so it was quite an intense period.

“I don’t think we were even told where we were going for the final but a car came to collect us.”

She said that having got that far, the prize seemed within touching distance and she was feeling quite competitive.

“I wasn’t nervous as such and when you get there you just have to focus,” said Mrs Casebourne.

“I think it was quite helpful having time limits on the challenges to give you a clear focus. You soon forget there is a camera right in front of you all the time.”

Mrs Casebourne is secretary of the Reading Guild of Artists and her work has regularly formed part of the group’s annual exhibition at the Old Fire Station Gallery in Henley.

She has spent much of her time during the pandemic producing work for the next show.

Mrs Casebourne said: “Before I had my studio, the house was bursting at the seams with art materials and I am in there most days now.

“Lots of people have turned to creative things to do during the pandemic and if you already have that then it is very useful.

“I would like to carry on enjoying art. It is a constantly changing journey and you are learning all the time, so you can never get bored with it.

“I exhibit my work and I do sell through my website, but I’m not so keen on the idea of commissions. If you’re a professional you are probably reliant on that but I am lucky I can do it for my own enjoyment.”