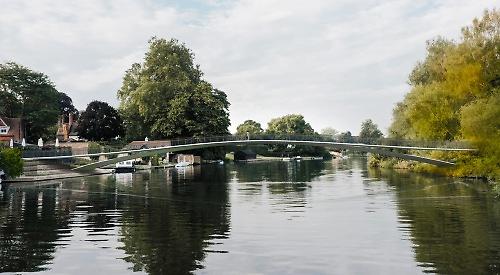 RESIDENTS of Shiplake are divided on plans to install a foot and cycle bridge linking the village with Wargrave.

The Wargrave Shiplake Bridge Campaign was launched last summer with the aim of resurrecting a project from the Nineties.

Members have identified the St George & Dragon pub on the Berkshire side of the River Thames as the most suitable site for one end of the bridge.

However, as they are mostly from Wargrave, they want to engage with people on the other side of the river where there are concerns about land ownership and repeats of the antisocial behaviour that occurred last summer on this stretch.

In 1997, the bridge project failed due to a lack of funding and residents of Shiplake mounted a campaign against it.

When the new plans were revealed last year, Shiplake Parish Council said it was “open-minded” but it is now opposed following discussions with villagers.

Fred Maroudas, chairman of the council, said the pros and cons had been “carefully considered” and it was felt the bridge was “simply not practical”.

He said: “Now we have had a chance to talk to residents about it and seen the problems on our side of the river experienced last year, it means our view has hardened quite significantly.

“There is a clear and unanimous view from the parish council and from our county councillor that a bridge is not necessary, nor would it be good for Shiplake.

“Last year, there were enormous problems. The farmer had his field inundated with bottles and cans for much of the summer. They damaged the fence and disturbed the boats moored there.

“There is only a narrow path and it can’t accommodate the number of people we had last year, let alone the numbers we’d have with a bridge.”

Councillor Maroudas said the existing rail link between Wargrave and Shiplake was sufficient and walkers could use the bridges in Henley and Sonning to cross the river.

He added: “We already have a large parking problem on this side of the river. Last year, Mill Lane was frequently used in a way that meant emergency vehicles and residents could not gain access and that would only be exacerbated.”

David Bartholomew, who represents Shiplake on Oxfordshire County Council, said: “Wargrave residents may wrongly believe that the fields along the river on the Shiplake bank are available for recreational purposes — they are not. The fields are part of a working farm.

“One of the fields is used by the Wargrave & Shiplake Regatta every summer but is rented by the farm to the regatta for just those few days.

“The Thames Path, which runs through the fields, can already be easily accessed from both Sonning and Henley.

“Parking in the lanes in the vicinity of Shiplake Lock is already a big problem during the summer and a new bridge would exacerbate this, with people driving to the area to use the crossing. The train service between Wargrave and Shiplake is a prized local resource and a bridge would take passengers away, reducing its viability.”

Michael Ryan, who lives in Mill Lane, said: “It is a private road with potholes and only access to houses permitted. There is no parking and at the junction with Mill Road it is very tight, with people ignoring the yellow lines, meaning emergency vehicles cannot get down the lane.

“Throughout the summer last year copious amounts of rubbish were left on the riverside.”

Jock Worsley, of Mill Road, said: “There is a considerable danger that people would flock over from the Wargrave side of the river to picnic on the farmland that runs the whole way along the river opposite Wargrave.

“There has been antisocial behaviour during the lockdown in that area, with lots of people gathering on private farmland. They left behind a considerable amount of litter.”

But Paul Seber, of Westfield Crescent, said he would welcome a footbridge.

“I think there is a need for it but I can understand why some people would be concerned about people spilling over the riverbank. When we walk our dogs, we see young people and they are just having a good time but I have heard that sometimes it can become unruly.”

Pat Popham, of Station Road, said: “We would love it. There is a walk we do up Crowsley Road, Mill Lane and down by the nursing home that takes us down to the river.

“If there was a bridge, it would be great and would make my walks more enjoyable. It would also be great to connect the two villages. It could be a gated bridge with a code that only residents had access to.”

Sarah Webb, of Northfield Road, said: “We would love to see it happen. It would mean you could get over to the George & Dragon and it would be easier for us to explore the other side of the river.

“It is good for health and exercise and it would be good for walkers. It is so beautiful down there and would help the pub financially.”

The railway bridge, which did have two tracks, was the preferred option in the original plans. Now the Henley branch line from Twyford is single-track, although the cylinders that support it are still standing.

In August, the campaign group carried out a survey to gauge how people felt. Ninety-five per cent of the 948 respondents backed the idea, with only 40 people objecting. Alternative sites have been explored by the group but these are yet to be revealed.

Zanna Jeary, a member of the bridge group, said that if the project gained momentum, public consultation would go ahead to ensure people on both sides of the river had a chance to put forward views.

She added: “Any bridge design would be mindful of the landscape and environment in which it is located.

“Consultation will be undertaken with the Environment Agency to obtain necessary flood risk activity permits and minimise impacts to navigation.”