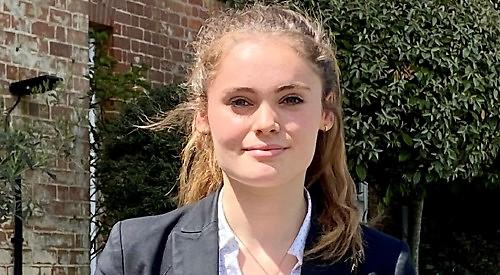 THE Oratory School in Woodcote has appointed its first female captain in its 162-year history.

Olivia Smith will share the role with her male counterpart, Tolulope Awoniyi.

The 17-year-old joined the independent Catholic school in Woodcote when it went co-educational in September.

Olivia, who lives in Station Road, Goring, with her mother Jacqui and older brother Alex, had to submit an application explaining why she was right for the role and then attend a series of interviews, including one with headmaster Joe Smith.

The captains will serve as a “voice” for the pupil body, making suggestions on various aspects of daily life as well as being role models for their peers and younger students.

Olivia said: “It felt amazing to be appointed to such an influential role though there’s also a sense of pressure as I want to do a good job of representing everybody. Mum was thrilled when she heard the news because she really likes the school and thought it was a great opportunity.”

Olivia, who is a member of the new all-girls’ Wootten House, was previously at Langtree School in Woodcote and took part in several drama productions at the Oratory as it always needed girls for mixed-gender casts.

She was pleased when it announced it was accepting girls as she liked its close-knit atmosphere whenever she visited.

Olivia said it was strange spending part of her first year at home during the coronavirus lockdown but she was enjoying her time at the school.

She said: “Having only a small group of girls prevents any cliques from forming and also helps us to have closer relationships with the boys.”

The Oratory was founded as a boys’ school in 1859 and moved to its current home in 1941. It went co-educational as there was growing interest and surveys showed parents no longer valued the single-sex aspect.