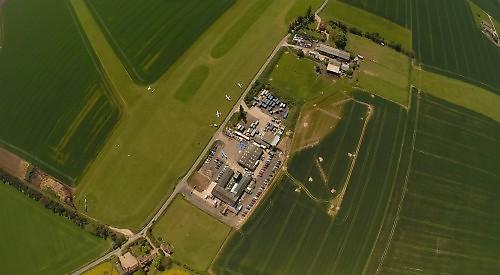 AN airfield near Woodcote is to close in the autumn.

Dennis and Julie Pearson, who founded Chiltern Park Aerodrome, off Icknield Road, in 1988, have been told to pack up by farmer Guy Hildred, who owns the 75-hectare plot and lives next door with his partner Diana Rhodes.

Mr Hildred says the venture has grown too big over the years and the noise of aircraft landing and taking off disturbs families living nearby.

The Pearsons were originally supposed to move last summer but negotiated an extension while they searched for a new home, which they are still doing.

The couple are in negotiations over several sites in South Oxfordshire and seeking the district council’s advice on getting planning permission but it will be at least a year before any replacement airfield is up and running.

In the meantime, they fear charities will lose out because the business raises thousands of pounds for good causes each year through sponsored skydives and wing-walks.

These are now on hold but the airfield will continue to operate its glider club until the final day, September 24.

It will also host a farewell barbecue for staff and regular customers in August, probably on the Sunday of the bank holiday weekend.

Last year, the Pearsons made a successful application to South Oxfordshire District Council to have the airfield designated an asset of community value and were supported by more than 300 residents. This made it only the second airfield to achieve this distinction. The status, which expires in 2025, could make it harder for Mr Hildred to secure planning permission for a change of use.

But he says the airfield will revert to farmland.

If he puts it on the market, he would have to wait six months for the community to put in a bid but wouldn’t be obliged to accept the offer.

Mr Pearson said: “It’s a shame that we’re going but we respect the landlord’s decision and will hopefully still be able to stay in South Oxfordshire as a lot of charities benefit from our work.

“There will probably be quite a gap before we re-open as we can’t be so remote that we’re inaccessible, but we also have to be far enough from houses so that we’re not creating a nuisance.

“The farming community has been very helpful, for which we’re grateful, but we’ve been shown a lot of sites that are tucked away down narrow lanes or too near to houses.

“We don’t want to give up because we’d be letting a lot of people down.

“We don’t need to expand but want to replicate the existing operation somewhere else.”

Mr Pearson said he and his partner had been “swamped” by messages of condolence since they announced the news of their departure on social media.

One person said: “So sad that such a great community asset is going — I will really miss what it has brought to the local area. My father-in-law has spent many an hour watching the planes on his visits.”

Another said: “Such a loss to the community. We love to drive past and see the beautiful planes and aircraft and watch them fly overhead. All the best for the future.”

Mr Pearson said: “People have been moved because they’ve got so many happy memories of this place and so do I.

“Many former students have been inspired to study aeronautical engineering at university so it has launched a lot of careers.

“There’s nowhere like it around here — the nearest equivalent is probably Popham Airfield at Micheldever in Hampshire and a lot of people will probably drift that way.

“Still, I’m positive for the future and hope to find somewhere suitable to continue for a few more years. Any upset I once felt is gone — you’ve got to move on and I’m just looking at what we can do in future.

“I think it will end up being the shortest-lived community asset in history as I doubt the district council will have the appetite for a major planning battle.”

The aerodrome provides work for dozens of instructors and has raised at least £1.5 million for about 200 charities, including the British Heart Foundation and Macmillan Cancer Support.

It is the only centre in southern England to offer all nine air sports recognised by Sport England and also serves as a training ground for the Thames Valley Air Ambulance, Thames Valley Police, RAF Benson and Goring fire station.

It has a perfect safety record and had up to 8,000 visitors annually before the coronavirus pandemic.

Mr Hildred said: “Crucially, we haven’t ended the lease to do anything else and people won’t suddenly see a new use in October.

“The airfield was fine when it was a few microlight planes but things have escalated and sitting in our garden is now intolerable.

“Even as I speak, two aircraft have just passed overhead and it’s worse at weekends when you’re hoping for a bit of rest. We couldn’t enjoy sitting on our own patio any more.”

Last year, the council ordered the airfield to stop hosting glider flights on part of its land which were off-limits under a planning enforcement notice issued in 2010.

The Pearsons also had to remove an unauthorised toilet block which was built five years ago.