Newlyweds celebrate at their pub 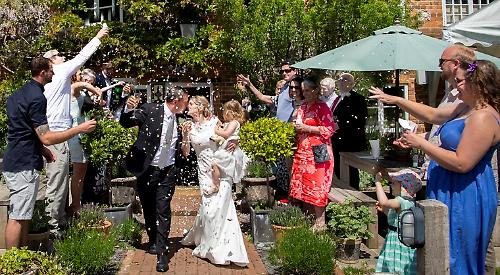 A LANDLORD and his bride celebrated their wedding at the village pub they run.

Dan Redfern, who took over the Cherry Tree Inn at Stoke Row three years ago, and Natalie Emmett, staged their reception for 30 guests at the Brakspear pub on Saturday.

They tied the knot at Henley register office in Northfield End before returning to the pub in an electric Mercedes driven by Mr Redfern’s friend Simon Hunt.

Also present at the ceremony were best man Steve Norcross, another childhood friend, maid of honour Amy Lishman, who lives in Henley, and the bride’s parents Ian and Deborah, of The Hamlet, Gallowstree Common.

Only his mother attended the register office while his father stayed at the pub to prepare the festivities with Mr Redfern’s children, Molly, eight, and George, five, and his bride’s children Amelia, eight, Ollie, seven, and Freya, three.

The bride wore a floorlength white sleeveless dress with a floral belt and the groom wore a dark suit jacket with a white rose in the lapel.

Mrs Redfern, who grew up in Sonning Common, couldn’t be given away because of coronavirus restrictions so the couple stayed together and relaxed with friends the night before and Mr Redfern saw the dress first thing in the morning.

Immediately after the ceremony, they visited the Hobbs of Henley boatyard and took part in a photoshoot on board a slipper launch with professional photographer Charlotte Snowden, from Checkendon.

This was a gift from the firm’s managing director Jonathan Hobbs and his wife Suzy, who live in Stoke Row and are friends of the couple.

They also gave the newlyweds miniature bottles of their Mr Hobbs gin to hand out.

When the couple arrived at the pub, they paraded along the front path while guests threw confetti.

There was a marquee in the garden with a pizza oven and large barbecue serving rib-eye steaks from the Caversham Butcher with salad grown on the premises. This was run by Michelin-starred chef David Cavalier.

Brakspear donated a barrel of its Gravity beer and some special pump clips, saying “Redfern’s Best” and featuring a photo of the couple with a message of congratulations.

A group of regulars paid for the wedding cake, which consisted of seven tiers of cheese, including Cheshire, Montgomery cheddar and smoked oakwood, and was dressed with dried fruit.

Mr Redfern said: “We’d always planned to marry at the pub because we wanted to be in our favourite place and with our family and closest friends around us, which is exactly what we got.

“It was the best day of my life. The river trip was absolutely magical and probably my personal highlight while the food was terrific.

“We wanted to enjoy everybody’s company in a relaxed, informal way and it went really smoothly, even if I did manage to fall off a ladder the night before while decorating the marquee.

“It was particularly nice to see my parents because they’ve been shielding throughout the coronavirus lockdowns and hadn’t seen their grandchildren since last July.

“The celebrations went on until about 9pm and I’m pretty sure we all had a great time, though it gets a bit blurry towards the end.

“We’ve had lots of congratulations from our customers and are so grateful that they paid for our cake. It was a lovely gesture and very suited to us.” Mr Redfern, who previously ran a pub at Harefield, first met his wife when she popped in for a drink in January last year and romance blossomed from there.

At the time she was working as an operations manager for Virgin Balloon Flights, which operates from a field at Harpsden.

She was living in Sonning Common but moved into the pub as they became closer.

The couple became engaged in October while staying at the Connaught Hotel in Mayfair to celebrate Mr Redfern’s birthday.

They had enjoyed dinner at the Blandford Comptoir restaurant in Marylebone and were casually discussing the idea when he proposed spontaneously and she accepted.

At Christmas, Mr Redfern presented her with a diamond ring belonging to his grandmother. He’d had it restored by Henley jeweller David Rodger-Sharp.

The couple had hoped to marry in March but had to postpone when the Government announced the end of lockdown rules for pubs on April 12 and they needed time to prepare for re-opening.

They went straight back to work this week but hope to enjoy a three-day honeymoon to Cornwall in August, then possibly a longer break in October.

Mrs Redfern said: “It was an amazing experience and it really felt as though things were going back to normal after a very tough year.

“We still couldn’t invite everyone we wanted because of covid rules but it was nice to celebrate in a chilled-out and unconventional way.

“As soon as we were engaged, there was no question that the celebration would be at the Cherry Tree because it’s our space and we could really make the day our own.

“We had loads of comments about the food and everyone appreciated the chance to enjoy each other’s company again.”