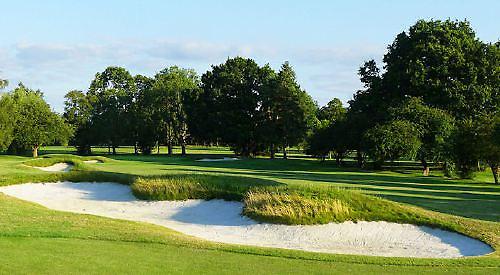 A FAMILY golf centre could be created in Chalkhouse Green.

Reading Golf Club has applied for planning permission for a wooden “lodge” to serve a new nine-hole course off Tanners Lane also offering both foot and disc golf.

Residents have opposed the plans, saying Tanners Lane is too narrow for more traffic and that the new facility would need improved access to make it safe.

The application to South Oxfordshire District Council comes less than two months after the club merged with Caversham Heath Golf Club and moved from Emmer Green to Mapledurham.

The club had already applied to Reading Borough Council for planning permission for 257 homes on land off Kidmore End Road which was part of its old course, sparking more than 3,000 objections. This is due to be debated by councillors on July 21.

The latest application is for consent to replace the old “halfway house” — a converted container on a brick-faced raised concrete slab — with a pre-fabricated wooden building with the appearance of a timber-framed lodge.

The new building would have a kitchen, office and storage space and the club, says would offer better cafe and toilet facilities to visitors.

There are currently about 20 parking spaces at the site, which would remain.

A planning statement submitted by Pegasus Group says: “The intent is to provide a family-friendly facility in tandem with the other land in South Oxfordshire that is proposed to be bequeathed as open space, allotments and for tree planting as part of the residential proposals being progressed in Reading.

“It is also proposed that a network of footpaths and cycle paths will connect these spaces, encouraging use by local residents.

“All aspects of the proposals, including the family golf centre, have been subject to close consultation with Sport England, who are supportive.

“The increase in size of the building is not considered to have any significant detrimental impact, given the tree screening of the location.”

But residents disagree. Paul Bardos, of Balmore Drive, Caversham, said: “Access for pedestrians and cyclists is dangerous along Tanners Lane, which does not have the capacity to sustain any significant increase in road traffic generated by this development.

“In my view this development runs the risk of causing fatalities in the road network leading to it.”

Michael Smith, of Kidmore End Road, said: “My concerns are that not only is the lane leading up the hill to the proposed facility extremely narrow, often used by walkers and cyclists, but that it is particularly dangerous at the bottom where it turns sharply as it becomes more like a road entering Emmer Green.”

Graham Farrington, also of Kidmore End Road, said: “It is a change of use from a tea hut to accommodate the golfers that used the course previously to a completely new commercial venture aimed at attracting numerous customers.

“There is inadequate access to the development along a narrow unpaved road. The car parking is inadequate and the increase in traffic would be a potential danger to residents.”

Louise Clements, of Jefferson Close, said: “A full planning application for change of use should be required for this commercial venture. There are no pavements in the area, making access dangerous for pedestrians. The proposed car parking space is inadequate. There is inadequate access to the site for delivery and maintenance vehicles. The narrow roads in the surrounding area are inadequate to service the increase in the volume of traffic.”

Clive Orr, from Emmer Green, said: “I am concerned that the narrow roads in the surrounding area are inadequate to service the increase in the volume of traffic. The access for all these can only be via Tanners Lane.

“There are no pavements in the area, making access dangerous for pedestrians. The proposed car parking space is inadequate and there is insufficient access to the site for delivery and maintenance vehicles.”

Helen Lambert, chairwoman of Caversham and District Residents’ Association, said the golf centre would be a more intensive use of the land and would cause a “significant” increase in traffic through the narrow lanes.

She added: “Far more detail is required in the application to allow this to be fully assessed.”

The district council is due to make a decision by July 14.