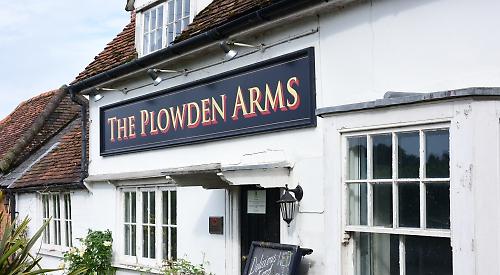 A COUPLE with a successful restaurant have stepped in to save a village pub less than half a mile away.

Liam and Ryan Simpson-Trotman, who opened Orwells in Shiplake Row in 2010, have bought the Plowden Arms on the A4155 Reading road at Shiplake Cross.

The pub, which dates back to the 17th century, has been closed since previous owner Karen Rackham left in January 2019.

Villagers had been concerned about its future due to an attempt to turn the site into housing but two applications to have it registered as an asset of community value have failed.

The Simpson-Trotmans, who have been married for four years, had been considering buying the pub for several years and made an offer when they realised there was a risk of it being lost forever.

They intend to re-open the pub early next year under its original name, the Plough.

The couple, who live at Orwells, will hire a dedicated manager for the pub but will try to divide their time equally between the two sites.

Liam, 36, said: “I’m proud to have been part of this community for the last 11 years. We’re here to stay and hopefully we can make the pub bigger and better than it has ever been.

“Ryan has always wanted a second property and when so many pubs are closing down across the country, it makes you think how many more we’ve got left and if they’re not revived will be lost.”

Ryan said: “A lot of people might say we’re mad buying a pub during covid but I really do think it is our future.

“We love to host people and if we can do that in a pub environment as well as having the fine dining it is a dream for us.

“What we didn’t want was for it to become a roadside dive, or for someone who isn’t very experienced to have it. The other option was the planning application and as soon as we found out about that, we put our heads together and said, ‘How can we save this place?’”

The pair first thought about buying the pub when it was put up for sale by Brakspear in 2016. It was bought by Ms Rackham the following year.

Last year, Heritage England, a Chinnor developer, made an unsuccessful application to convert the pub into eight homes.

South Oxfordshire District Council, the planning authority, said the pub was “an essential community facility” and should not be lost to the village. However, attempts by Shiplake Parish Council to have the pub made an asset of community value were twice rejected by the district council.

The parish council included the results of a public consultation in which 95 per cent of the 211 respondents said they wanted the pub and garden to remain as they were.

However, the council said there was not enough evidence to support claims about clubs and acitivities taking place at the pub in the past in order to show its community value.

James Carpenter, head of corporate services, said: “Although the pub has been shut for the past two years, there is still strong feeling and a ‘village voice’ that this is a community asset that should be saved, with residents being fearful that the pub will be redeveloped into residential property.

“However, this is not the test against which assets of community value are assessed.”

If the parish council had been successful and the owner wanted to sell the pub, they would have had to wait six months to give the community a chance to make a bid but would not have been obliged to accept any offer.

Liam said there was now no need to make the pub a community asset.

“We’re keeping this pub forever,” he said. “This is not going to be a flash in the pan.

“The most important thing for us is that we’ve saved the village pub that has been standing there for hundreds of years.

“We just need to take the shell as it is, open it up and give it the life it deserves so that it is still here for another 400 years.”

During the coronavirus pandemic, Orwells offered takeaways and a village shop to help the community when the supermarkets were struggling for stock.

Ryan, 38, said the pair enjoyed the “buzz” this created and did not want to lose the connection they had made with so many villagers.

He said: “Through covid, we brought the community together and had a little bit more of a relaxed feel, which everyone appreciated.

“We saw people that we’d not seen for years because Orwells had become more fine dining and it was a place they would go once every six months. There was a great vibe.”

Liam added: “Covid reinforced what we believed in. When we first started off in 2010, we were a pub and those people came every week. As times changed and we got more confident, the menu changed.

“Doing the takeaways during covid, we just thought, ‘We can’t lose that’ and as things started opening up again people were going back to pubs.

“I pinch myself every day knowing that we are successful but I know that is all down to hard work, the love we have for the products and the customers and staff.”