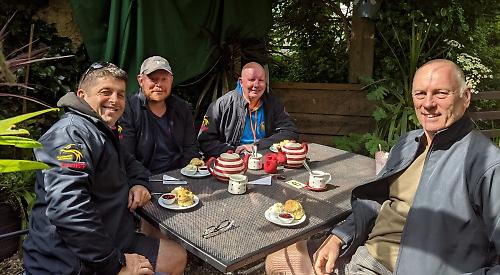 FOUR friends hope to make history next week when they take on a charity swimming challenge.

The Henley River Rats will be aiming to become the first team to cross the Bristol Channel in relay without wetsuits.

Phil Warren, Mark Reed, Mike Wood and Tony Baxter, who are all members of Henley Open-Water Swimming Club, will swim from Ilfracombe in Devon to Swansea in South Wales on Tuesday, starting at 11.30am and finishing anywhere between 15 and 24 hours later.

The men hope to raise £5,000 for Mind as they have all experienced mental health problems.

Exactly 16 days later, the five women who make up the Henley Mermaids hope to become the first all-female team to complete the same challenge.

The Bristol Channel is a 45km stretch of water between England and Wales which is hazardous because of the strong tides.

The River Rats are all experienced swimmers and are taking on the longest of the five possible routes. They will take it in turns to swim for an hour and in between will rest on a rigid inflatable boat with no sleeping facilities.

Mr Warren, of Whitehouse Road, Woodcote, said the thought of entering the record books was the “driving force” for the quartet.

He said: “I think it will be manageable because of the team we have got. We are all of the same mindset and we will never quit, however long it takes.

“It is a daunting challenge but we are determined to do it for each other and the charity. The only way we won’t is if there is a danger due to the conditions and we are forced to stop.”

Mr Warren, 50,  a self-employed electrician, came up with the idea of the challenge in December as he thought it would be good to have a distraction from the coronavirus pandemic.

He had a breakdown five years ago and has suffered with depression on and off ever since but has found swimming to be a lifeline.

His preparation has been a mixture of swimming in the River Thames and at Caversham Lakes, cycling and weight training.

He has completed the Thames Marathon twice and holds the event record for the breaststroke. He represented Great Britain at the World Ice Championships in 2019 and took part in a club trip to the Arctic four years ago.

He and the other Rats also took a weekend trip to Ilfracombe last month to familiarise themselves with the sea conditions.

Mr Warren said: “I’m certainly a stronger and faster swimmer than I was and now I have a mindset when I’m in the water that is much more focused.

“My biggest concern is swimming at night as it will be new for me so it is an extra mental aspect.

“The timing is to coincide with low tide, which means we will swim a lot of it in the dark.”

Mr Wood, 44, of Harpsden Road, Henley, will swim the first leg, and has been spending this week in Ilfracombe and Torquay to get in some extra practice. His biggest achievement to date was completing the Scilly Swim Challenge, off the coast of Cornwall, in September. This involves swimming 15km between six islands.

He has also completed the Jubilee River Swim between Windsor and Maidenhead, the Club to Pub Swim in Henley and the Henley Classic.

Mr Wood, who is head of the solutions consulting team at a fashion technology company, is excited about the challenge.

“The jellyfish is the one aspect that does worry me but I think you have to focus on the things that are in your control,” he said.

He spent six weeks unable to train in the river in Henley after picking up an eye infection. He made up for this by cycling and doing weight training before he returned to swimming  in May.

He believes the Rats have developed a “strong bond” that will serve them well when they are feeling low during the swim.

“We have all talked about how we can pull through when we are low. One of the biggest factors will be the tiredness but we will all be looking out for one another.”

He has experienced depression since his mother, Jeanne, died from cancer when he was 21. Mr Wood said: “So many people have experienced mental health problems, either in the past or with everything that’s going on with the pandemic.

“I was one of those people and it is often a combination of things that can affect you. It is so important to talk about it.”

Mr Reed, who will be the second swimmer to enter the water, believes the Rats have done all they can to be ready.

“The preparation has been going well and we are really confident,” he said. “We have spent a lot of time together and we have become very close and I think that will help us a lot.

“I have been doing a lot of swimming over the last few months and building up my strength.”

Mr Reed, 56, a retired social worker from Caversham, was diagnosed with bipolar disorder in 2001 and says swimming is “massively important” to his mental health.

He joined the swimming club in 2014 and completed the Thames Marathon for the first time that year and again in 2018.

Mr Reed has been practising at Caversham Lakes every day but said that swimming in the sea had made him more optimistic.

He added: “Training in the salt water is very different because it is much more buoyant and we’ve been able to do some longer swims.

“We are starting to get used to the fact that we are going to be in the water for an hour at a time. It is not just about physical but also mental stamina.”

Mr Baxter, a former staff sergeant in the military, has been a member of the club since 2016, even though he lives in Hemel Hempstead. Henley was the nearest option at the time and before the coronavirus pandemic he would travel as often as six days a week to swim with his clubmates.

Mr Baxter, who now works as a facilities manager, has suffered from anxiety since 2018, which he puts down to a number of factors.

He took part in a week-long training camp in Dover last month.

He said: “I’m a strong swimmer but I’m not that quick. The other guys are very quick and strong and I wanted to make sure that I didn’t let them down.

“I don’t think we could have done any more work. The bond that we have got and all the hard work we have put in is amazing. I would not want to do it with another group of guys.

“The fear of failure is one of my driving forces. The only thing is if the weather is atrocious but that is the only thing that will prevent us from being successful.”

Mr Baxter has swum the Thames Marathon, and the Jubilee River Swim and was part of a six-person relay team that swam the Channel in 2019, helping to raise £5,000 for the children’s intensive care unit of St Mary’s Hospital in Paddington.

He said: “Lots of people do the Channel relay and unless there is something really extreme you are likely to be fine but this is completely different. There are so few relay teams that have done it so it is really hard to know what the outcome will be.”

The Rats have raised £3,289 so far. To make a donation, visit
justgiving.com/team/henleyriverrats

You will be able to track their progress during the swim at  bit.ly/2Svzm7p