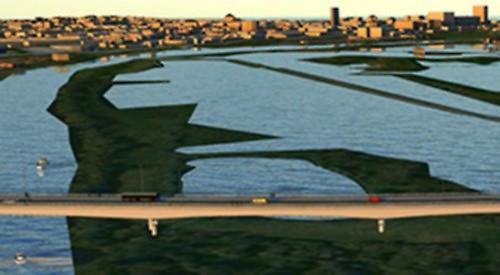 PLANS to build a third bridge across the River Thames in Caversham appear to be doomed.

The Department for Transport is reluctant to provide up to
£1million in funding for an outline business case for the scheme unless everyone involved supports this in principle.

But both South Oxfordshire District Council and Oxfordshire County Council are opposed to a new bridge and the former has refused to sign a joint statement agreeing further research is needed.

The district council, which declared a climate emergency in 2019 and pledged to take measures against rising global temperatures, says a bridge for use by cars and lorries is “totally inappropriate”. The county council, a highways authority, has only signed the statement because it believes it has a duty to co-operate with Reading and Wokingham borough councils, which are behind the £100 million bridge plan.

The DfT also says that the strategic outline business case for the bridge, which was drawn up in 2016, must be updated because the methods used to calculate the traffic impact are now out of date.

Reading Borough Council’s latest transport strategy proposes a new Thames crossing linking the eastern side of Caversham, off the A4155 near Playhatch in South Oxfordshire, to the A3290 at Thames Valley Park spanning more than a mile over Caversham lakes.

It is also proposing an “orbital road” linking the A4074 to the A4155 and park and ride sites near Cane End, Emmer Green and Playhatch, which it says would address the congestion problem in Caversham.

Sue Cooper, leader of the district council, said: “In the context of the climate emergency, a car-based solution to a car-based problem that would pour thousands of cars and heavy goods vehicles into Oxfordshire is totally inappropriate. Should a new bridge be built, it should be restricted to public transport, cyclists and pedestrians.”

She said the district council recognised there were congestion issues in and around Reading but did not believe a third bridge was the solution.

Cllr Cooper, a Liberal Democrat who runs the council in coaltion with the Greens, added: “We cannot be part of a programme that is focused on a car-based bridge... but will continue to offer our working together to mitigate current issues in and around Reading to improve connectivity for South Oxfordshire residents.”

David Bartholomew, who represents Sonning Common on both the district and county councils, welcomed the latest development. He was told by Duncan Enright, cabinet member for travel and development strategy at the county council, that the plan had been paused for seveal reasons.

Councillor Enright said: “The DfT wishes to see updated transport data and also a refresh of the original strategic outline business case. An update is expected to be quite costly and will not be funded by the DfT. Therefore, there is a need to identify funding locally and this has not been forthcoming. The DfT is also keen that any future bids or business cases which will be submitted have the support of all the authorities affected.

“Further work on the strategic outline business case would give the authorities a chance to work together and look in detail at the options being assessed.”

Cllr Bartholomew told the Henley Standard: “I think the bridge is dead in the water, given that the earlier business case must also be readdressed. I suspect this was down to outdated traffic modelling because it failed to account for what would happen once motorists arrive in Oxfordshire.

“There was a single oblique sentence saying it would be ‘dealt with’ by ‘traffic management measures’, which is totally inadequate considering the implications.

“The parishes in my division are up in arms because the consequences still haven’t been demonstrated.

“The county council isn’t a promoter of the bridge but signed the joint statement so it could have a ‘seat at the table’ as talks progressed, whereas Cllr Cooper felt it went against the district council’s mission.

“There’s clearly no way forward for now and this will mostly be welcomed by people who are horrified at the thought of Reading’s traffic being funnelled through the South Oxfordshire countryside.

“We have sympathy for the congestion issues but shifting them elsewhere isn’t the answer. The longer this drags out, the less appropriate a car-based bridge will be anyway.

“Given the need for a public inquiry, we could be looking at a 20-year timeframe and it’s likely that technology and travelling habits will change hugely in that time.”

Henley MP John Howell, who has previously called the business case for the bridge “utter rubbish”, said: “The matter is definitely on hold, which will please communities who fear that the bridge would simply disgorge lots of traffic in their direction.

“The project’s supporters have never done the work to demonstrate its likely effects and until that changes I will not support it.

“Other alternatives which could take public transport or a park and ride scheme should perhaps be looked at again, though I would wait until we are fully out of the coronavirus pandemic.”

But Reading East MP Matt Rodda, whose constituency covers Emmer Green and Caversham, said: “I’ll be looking at the DfT’s response closely as I’m in favour of the scheme as long as it can be shown not to harm the environment and I believe there should be a way of achieving that.

“It’s very important that authorities on both sides of the river co-operate because in places like Henley and Caversham, people’s lives are blighted by traffic crossing the river and the air pollution which this causes.

“We need to put all party politics aside and have sensible discussions to agree a way of easing these problems. I’m very keen to sit down and talk with South Oxfordshire District Council to see if we can find a way forward.”

Tony Page, who is Reading Borough Council’s member for transport, said he would ask the DfT to consider funding the outline business case without South Oxfordshire’s co-operation.

He said the district council should have signed the agreement because it was to explore a number of options, not just a bridge, and these would benefit people on both sides of the river.

Councillor Page said: “The DfT would like everybody’s co-operation but ultimately South Oxfordshire is not a highways authority and I would strongly question how much weight its refusal should carry. The council clearly doesn’t want to be taken seriously and hopefully the department will reconsider the desirability of having it involved.

“Councillor Bartholomew represents a long-standing group of opponents who know everything about what they’re against but have no credible, positive vision for what they hope to achieve.

“Much the same could be said of its current administration, which bangs on about investment in alternatives like public transport and cycling but never comes forward with anything solid.

“When it comes to the borough of Reading, they seem to only want to do it down — we’ve been asking for sites for a park and ride for a long time and they’ve never suggested anything.

“I only wish they would engage with the process more seriously. I have tried extending the hand of friendship but I’m afraid it has been rejected.”

A DfT spokesman said: “Our officials noted the position [of the councils] and indicated that, in view of disagreements about a new road bridge option, we would expect any alternative option that came forward to have the support of all the authorities involved.”

The county council said it was continuing to work with Wokingham and Reading councils and the DfT.