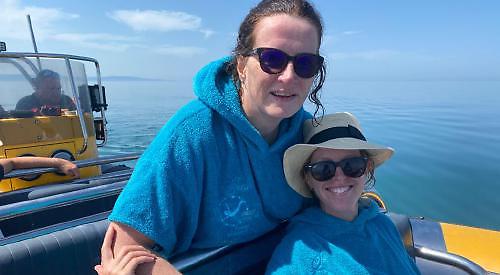 A GROUP of women from Henley has raised more than £50,000 by taking on a charity swim.

The Henley Mermaids attempted to cross the Bristol Channel, a 45km stretch of water between Swansea in Wales and Ilfracombe in North Devon.

Laura Reineke, Jo Robb, Joan Fennelly, Susan Barry and Fiona Print would have been the first all-female team to complete the challenge.

They ended up travelling 60km in 14 hours due to the strong tides, but conditions became unfriendly towards the latter stages and they were forced to stop with 6km to go.

The women were swimming in aid of Sunrise for Brain Conditions, a charitable partnership that supports research into Huntington’s disease, Parkinson’s disease, motor neurone disease and multiple sclerosis.

The Mermaids were due to start the swim on Thursday, but they set off shortly after 9am on Tuesday.

The time was brought forward by two days to give them the best chance of swimming in safe conditions.

Ms Reineke said: “The tides conspired against us. We’ve been pulled with 6km to go. With the tide change, we’d have been ripped back out into the channel. We will complete this swim and hopefully this year.

“In usual Mermaid style, we are still the best of friends who in possibly the worst 18 months ever have raised more than £50,000 for charity.”

The Mermaids, who are all members of the open-water swimming club in Henley, swam for an hour at a time in relay and rested on a rigid inflatable boat.

A full report will appear in next week’s Henley Standard.