Whose garden will bee the best? 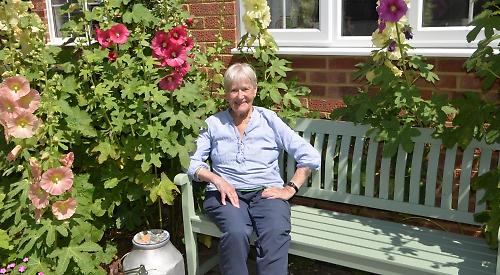 HENLEY’S most bee-friendly garden will be decided this week.

Judges are visiting the 29 contenders in this year’s best front garden competition, which is organised by the town council’s Henley in Bloom committee and has been revived after being cancelled last year because of the coronavirus pandemic.

Entrants were required to plant flowers which are particularly attractive to bees in order to help with the overall decline in the populations of Britain’s wild and honeybees.

Patricia Knights, of Fair Mile, has planted opium poppies and wildflowers in her front garden which she hoped would not only appeal to bees but also cheer up passers-by with their colour.

“Most of them are easy to grow and a lot come back every year,” she said.

“If I see something I like, I plant it or I get a packet of wildflower seeds and sprinkle them around and see what comes up.

“It’s nice having colourful gardens that cheer people up when they come past, especially with covid when people have been walking more along here.”

She also has apple, pear, plum and fig trees as well as a small water fountain in the middle of her garden for birds.

Ms Knights, who lives with her border collie Freddy, five, entered the front garden competition a few years ago and received a highly commended award.

“I was so pleased,” she said. “I enjoy gardening so it’s for my own satisfaction really.”

Jill Richardson, of Milton Close, designed her garden with bees in mind.

She said: “The plants are pretty much looking after themselves, although I did have a design in mind originally, which was done by a professional.

“That was quite a few years ago now and the garden has changed in that time.

“It was designed to be wild. Anything to get the insects back is important.”

Ms Richardson, who has lived in Henley for about 40 years, has a lot of perenniel plants on one side of the stone path leading up to her home. These include hollyhocks, geraniums, roses and purple sage.

She said: “I’m a bit too old now to look after the garden but sometimes I pull out things I think are not meant to be there and cut things back. That’s all I do really. I won highly commended in the competition last year, which was my first time taking part. It’s a very good competition.”

Rita Szucs, of Marlow Road, said her front garden was “all about the bees” and even has a layer of sedum plants on the roof of her kitchen extension.

“It attracts hundreds of bees every day,” she said.

Her front garden has a variety of petunias, poppies, snapdragons, cosmos, marigolds, lavender, verbena, cornflowers and daisies. These are growing in pots to the right side of her door or balanced on the windowsill.

“I also have a little greenhouse in my back garden where I am growing all sorts of vegetables and berries,” said Mrs Szucs.

“I wanted to involve our lovely neighbourhood kids in gardening so I planted some strawberries so when they are ripe they can pick them. It’s lovely to see the happiness on their little faces.

“I entered the competition because gardening is my passion.” Susan Bowles, of Vicarage Road, planted lavender and poppies in her front garden to attract bees.

She also has a variety of daisies, hydrangeas, roses, magnolia florals, agapanthus, roses, star jasmine and lilies as well as some bamboo.

These are planted on either side of a path leading up to her front door and around the edge of the garden.

Ms Bowles said: “There wasn’t really a plan with my garden. There just wasn’t anything here at all 15 or 16 years ago — I think there was only one bush.

“I didn’t want to mow any grass so there’s a stone path surrounded by bushes and trees. They were mostly gifted to me so they have sentimental value.

“The garden’s shaded by next door’s trees for most of the day so I get the most sun in the afternoon.

“I’ve done all the planting myself as I enjoy doing it. Sometimes I buy little things from the supermarket and they do very well.

“As my garden is mostly bushes and trees, they can be left to themselves most of the time.”

Ms Bowles also has a little seating area at the top of her garden where she often enjoys a cup of tea in the afternoon.

She said: “Someone popped their head over the gate and suggested I do the competition. It’s a nice thing for the community to take part in.

“It has encouraged me to do more in the garden whereas before I may have just sat and had a cup of tea.”

She also has a vegetable patch in the middle of her garden where she is growing courgettes, broccoli, raspberries and chives.

Henley in Bloom brought back the competition as residents have spent so much time in their gardens during the lockdowns.

Its pubs and restaurants gardens competition may also return this year.